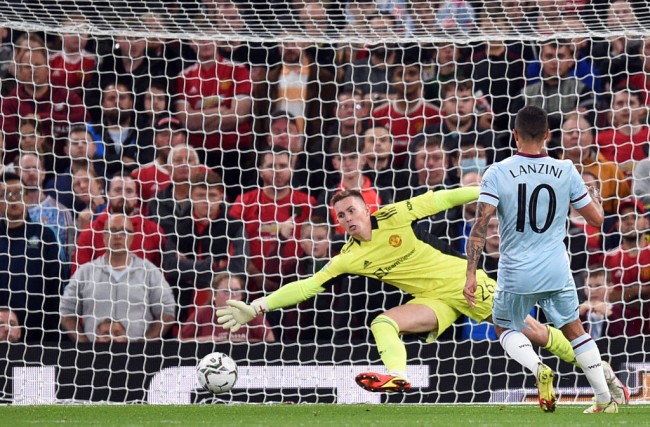 West Ham gained immediate revenge for their 2-1 defeat to Manchester United in the Premier League three days ago. On Wednesday, the Hammers recorded a nail-biting 1-0 win at Old Trafford to knock the Red Devils out of the Carabao Cup.

It was a disappointing early exit for Manchester United, who have reached the semifinals of this competition twice under manager Ole Gunnar Solskjaer. His gamble to field a second-string lineup in this contest backfired, with West Ham taking an early lead in the ninth minute via a strike by Manuel Lanzini.

West Ham to face Manchester City next in last 16

That proved to be enough for the Hammers, who gave manager David Moyes his first win over the Red Devils in nine attempts since United sacked him in April 2014. It won’t get any easier for West Ham, though, in this competition as their reward for their upset win over United is a Round of 16 clash with reigning Premier League champions Manchester City.

The Citizens, who have won the last four editions of the Carabao Cup, booked their place in the last 16 with a comprehensive 6-1 win over Wycombe on Tuesday. Riyad Mahrez scored twice for City, who battled back from a 1-0 deficit in the first half.

It was a dream start for academy graduates Josh Wilson-Esbrand, Romeo Lavia, James McAtee, Conrad Egan-Riley, Luke Mbete, and Finley Burns, who got the win in their senior debuts for City.

Chelsea, Liverpool advance to Round of 16

Premier League leaders Chelsea and Liverpool also advanced to the Round of 16 of the Carabao Cup after securing contrasting victories mid-week. Chelsea needed penalties to beat Aston Villa in the third round, with Reece James scoring the deciding spot kick. Liverpool wasn’t troubled in their clash with Norwich, with the Reds cruising to a 3-0 away win.

Liverpool got a fortunate draw in the last 16 as they will next face Championship side, Preston. Chelsea’s next opponents will be another Premier League outfit, with the Blues taking on Southampton in the Round of 16.

Apart from the West Ham-Manchester City and Chelsea-Southampton cup ties, three other matches in the Round of 16 will be contested by teams in the Premier League. On Tuesday, Arsenal’s reward for beating AFC Wimbledon, 3-0, is a meeting with Leeds. The Peacocks booked their spot in the last 16 with a 6-5 win over Fulham in a penalty shootout.

Premier League sides Burnley and Tottenham also will square off in the Round of 16 after they defeated Rochdale and Wolves, respectively. Leicester and Brighton also were drawn together to face each other in the last 16.

Completing the set of cup ties for the fourth round are Stoke vs Brentford and QPR vs Sunderland.

Will A Robot be Able to Give Birth to A Child Robot of Her Own?