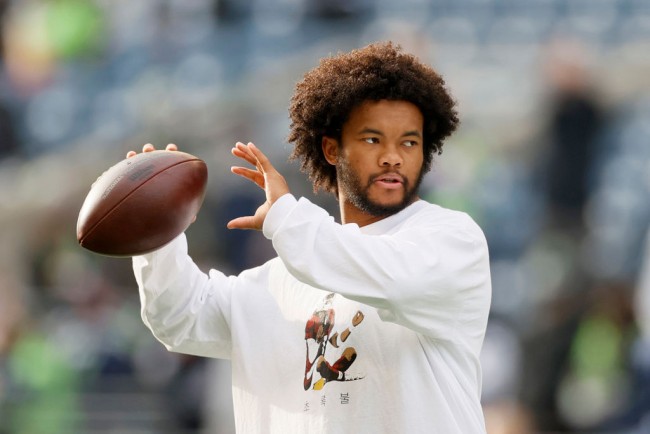 SEATTLE, WASHINGTON – Kyler Murray #1 of the Arizona Cardinals warms up before the game against the Seattle Seahawks at Lumen Field on November 21, 2021 in Seattle, Washington. (Photo : Steph Chambers/Getty Images)

The Chicago Bears have won five of their last seven games against the Arizona Cardinals. The Bears hope to extend that dominance in Week 13 when they square off with the Cardinals at Soldier Field. Here’s a breakdown of this pivotal NFC matchup.

The Arizona Cardinals headed into their bye week feeling good about themselves after defeating the Seattle Seahawks on the road in Week 11. The Cards pulled off a 23-13 victory over the Seahawks to improve their record to 9-2, the best slate in the NFL this season.

Colt McCoy starred for Arizona in the Week 11 win, completing 35 of 44 passes for 328 yards with two touchdowns and no interceptions. He thoroughly outplayed Russell Wilson as the Cardinals improved to 2-1 with McCoy as their starter. McCoy was handed quarterback duties for the third game running with Kyler Murray still sidelined with an ankle injury.

He got some help from Zach Ertz, who caught eight passes for 88 yards and a couple of touchdowns. James Conner did some damage on the ground, running for 62 yards and a score on 21 carries.

The good news for Arizona is that Murray will be fit and ready to go for the game against Chicago. He has recorded 17 passing and three rushing touchdowns this season. Murray has passed for 9,969 yards and 63 touchdowns in 40 starts in his NFL career, posting a 20-19-1 record during that span.

On Thanksgiving Day, the Chicago Bears finally snapped their five-game losing skid with a thrilling 16-14 victory over the Detroit Lions. It was a big win for the Bears, who improved their record to 4-7.

Andy Dalton played a big part in keeping the Lions winless, completing 24 of 39 passes for 317 yards with one touchdown and one interception. Dalton, who had an 85.1 passer rating, clinched the 30th 300-yard passing game of his 11-year NFL career. It was also the most yards a Bears quarterback threw since Nick Foles passed for 335 yards on November 8, 2020.

Dalton may get the start again in Week 13 against Arizona with Justin Fields dealing with cracked ribs, an injury he suffered in the loss to the Baltimore Ravens. The good news for Bears fans is that it is not a long-term injury, with general manager Ryan Pace telling reporters that it is more of a day-to-day thing.

Fields is not the only injury concern for the Bears, though, with Roquan Smith suffering a hamstring injury in the win against Detroit. That is a massive blow for a Bears defense that is already without Khalil Mack, Akiem Hicks, and Danny Trevathan.