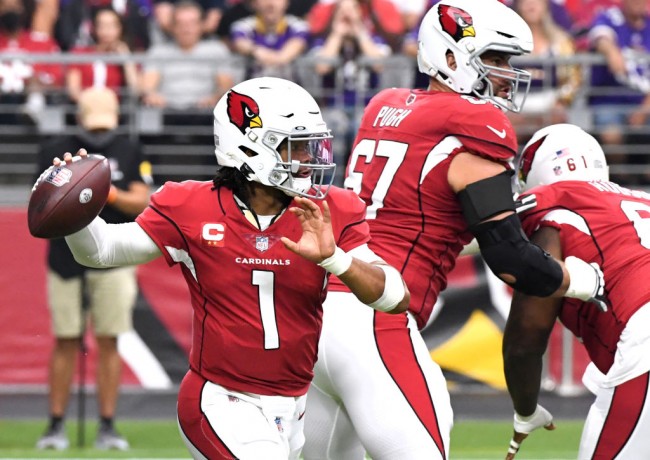 GLENDALE, ARIZONA – Quarterback Kyler Murray (#1) of the Arizona Cardinals passes the ball against the Minnesota Vikings in the first quarter of the game at the State Farm Stadium on September 19, 2021 in Glendale, Arizona. (Photo : Norm Hall/Getty Images)

Arizona maintained its perfect record this season with a thrilling one-point victory over Minnesota on Sunday. The Cardinals will look to stretch their unbeaten run even further when they take on the struggling Jacksonville Jaguars in Week 3. Check out our preview for a breakdown of this Cardinals vs. Jaguars clash.

The Arizona Cardinals will head to their showdown with the Jacksonville Jaguars with momentum on their side after escaping Week 2 with a dramatic 34-33 win over the Minnesota Vikings. The Cards managed to hold on to the victory after Vikings kicker Greg Joseph missed a 37-yard field goal attempt wide right in the dying seconds.

The key to Arizona’s hot start has been the excellent play of Kyler Murray. The 24-year-old quarterback played one of the best games of his career against the Vikings, throwing for 400 yards and three scores while running for 31 yards and another touchdown. Murray’s passer rating stands at an incredible 121.5 mark through Arizona’s first two games.

He will look to keep it going against a Jacksonville side that is fourth-worst in the NFL in total defense this season, allowing 423.5 yards per game this campaign. Murray completed 6 of 7 passes for 200 yards and two touchdowns on throws that went at least 15 yards in Week 2. That spells trouble for a Jaguars secondary that has allowed 591 passing yards thus far this season.

Jacksonville’s losing woes show no sign of ending as the Jaguars absorbed their 17th consecutive defeat on Sunday against the Denver Broncos. The Jags had no answer for Teddy Bridgewater, who completed 26 of 34 passes for 328 yards and a pair of touchdowns.

It won’t get any easier for head coach Urban Meyer and the rest of the Jaguars in Week 3 as they will face the red-hot Cardinals next. For the Jaguars to record a major shock and snap their franchise-record 17-game losing streak, they will need Trevor Lawrence to step up his play.

Trevor Lawrence is going to be a problem.#DENvsJAX on CBS pic.twitter.com/MMfnTA6YJZ

In his home debut, the No. 1 overall pick in this year’s NFL draft looked out of sorts, with Lawrence completing just 14 of 33 passes for 118 yards and a touchdown with two interceptions. He did have a great start against the Broncos, throwing for 73 yards in his opening drive that was capped by a 25-yard touchdown reception by Marvin Jones Jr.

The Jaguars fared poorly after that drive, with Lawrence recording just 26 passing yards in the next three quarters. That won’t do against a Denver team that’s averaging 36 points per game this season, second-best in the NFL.

10 Best Cryptocurrencies to buy in September for Big Benefits