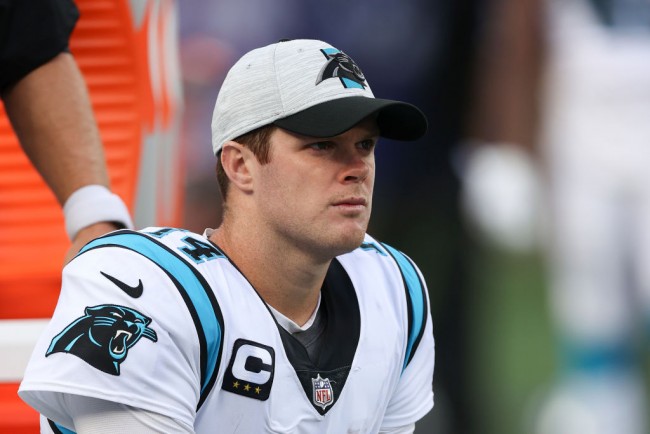 EAST RUTHERFORD, NEW JERSEY – Sam Darnold of the Carolina Panthers reacts on the bench during the second half in the game against the New York Giants at MetLife Stadium on October 24, 2021 in East Rutherford, New Jersey. (Photo : Al Bello/Getty Images)

The Atlanta Falcons have won five of their last six home games against the Carolina Panthers. The Falcons hope to extend that dominance in Week 8 when they square off with the Panthers at the Mercedes Benz Stadium. Who will emerge victorious in the Panthers vs. Falcons clash? Check our preview to see who has the edge in this NFC South showdown.

Carolina’s losing woes show no sign of abating as the Panthers stumbled to their fourth consecutive defeat with a humiliating 25-3 loss to the New York Giants in Week 7. After opening the season with three consecutive wins, the Panthers head into Week 8 with a losing record of 3-4. They are now three games behind leaders Tampa Bay Buccaneers in the NFC South standings.

For the Panthers to snap their four-game losing skid against the Falcons, they will need to improve their play on the offensive end. They recorded just three points and 173 total yards against the Giants, the lowest numbers they have put up during the Matt Rhule era. Such was the Panthers’ offensive futility that they benched quarterback Sam Darnold in that game.

This is one play of 6+ that look like this… pic.twitter.com/zw127k6c7l

Darnold struggled mightily in that contest, throwing for just 112 yards with no touchdowns and one interception for a measly 57.4 rating. The Giants also recorded a safety against the Panthers after referees called an intentional grounding on Darnold. The Panthers had difficulty converting on late downs, going just 2 of 15 on third down opportunities against New York.

It won’t get any easier for the Panthers against the Falcons as they have poorly fared against them of late. Carolina has lost six of its last seven games against Atlanta, dating back to 2017.

Atlanta extended its winning streak to two games with a thrilling 30-28 victory over the Miami Dolphins in Week 7. It was an incredible come-from-behind victory for the Falcons, who moved to .500 for the first time this season. They trail leaders Tampa Bay by 2.5 games in the NFC South standings with their even 3-3 record.

Matt Ryan led the way for the Falcons in the narrow win, completing 25 of 40 passes for 336 yards with two touchdowns and one interception. He forged quite a connection with highly touted rookie Kyle Pitts, who caught seven passes for 163 yards. Ryan made two big throws to Pitts in the 57-yard, game-winning drive against Miami.

Ryan has been exceptional in the Falcons’ last four games, averaging 301.0 yards with a 107.0 passer rating and a 10:1 TD-to-INT ratio during that stretch. The Falcons have benefited from Ryan’s excellent form, going 3-1 during that span.

Created an AI system That Translates Natural Language to Code