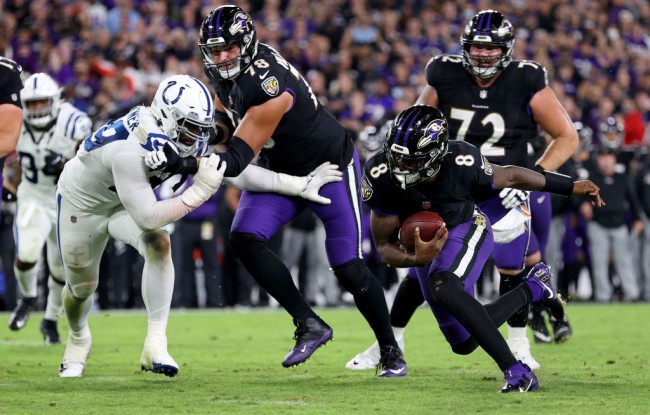 BALTIMORE, MARYLAND – Lamar Jackson (#8) of the Baltimore Ravens rushes during the fourth quarter in a game against the Indianapolis Colts at the M&T Bank Stadium on October 11, 2021 in Baltimore, Maryland. (Photo : Rob Carr/Getty Images)

This coming Sunday, two of the league’s best young quarterbacks lock horns as Justin Herbert and Lamar Jackson square off in the Chargers vs Ravens Week 6 game. Which AFC team will emerge with a 5-1 record in this matchup?

The Los Angeles Chargers stretched their winning run to three games with a thrilling 47-42 come-from-behind victory over the Cleveland Browns. It was a pivotal win for the Chargers, who snapped the Browns’ three-game winning streak. The Chargers are now in sole possession of the first place in the AFC West after the Las Vegas Raiders and Denver Broncos lost their games on Sunday.

Justin Herbert led the way for the Chargers in Week 5, completing 26 of 43 passes for 398 yards with four touchdowns and no interceptions. He also did damage on the ground, rushing for 29 yards and a score on four carries. Herbert now has 11 300-yard passing games under his belt, the most by any quarterback in their first two years in the NFL.

Herbert got some help from Austin Ekeler, who scored three touchdowns in the fourth quarter, including a 3-yard score with 1:31 left that gave the Chargers the lead for good. He finished the game with 119 scrimmage yards, 66 of which came on the ground and 53 through the air.

The Baltimore Ravens pulled off another great escape on prime time, recording an incredible 31-25 overtime victory over the Indianapolis Colts on Monday Night Football. The Ravens snatched victory from the jaws of defeat, scoring 22 unanswered points to turn a 25-9 deficit in the fourth quarter into a six-point win in the end.

What a performance from Lamar Jackson 👏 pic.twitter.com/UUUX35IYzb

Lamar Jackson inspired the comeback win, leading the Ravens to two touchdown drives in the final period and executing two-point conversions to force overtime. He continued his fine play in the extra period, engineering a touchdown drive on the opening possession to extend Baltimore’s winning streak to four games.

Jackson made history in the win against Indianapolis as he became the first quarterback in the NFL to complete 85 percent of his passes in a 400-yard game. He is also the first player in NFL history to record 400 yards passing, four touchdown passes, no interceptions, and 50 yards rushing in a single game. Jackson also completed 86 percent of his 43 passes on Monday, the highest completion rate in a 40-pass game in league history.

Jackson showed his flair for the dramatic after a poor start which saw Baltimore trail 22-3 at one stage in the third quarter. However, the Ravens delivered a comeback for the ages as they improved to 1-17 in the Harbaugh era when trailing by 19 or more points.

LA Chargers win on the road against Baltimore.

Uncovering The Real Value of Managed IT Services For Business