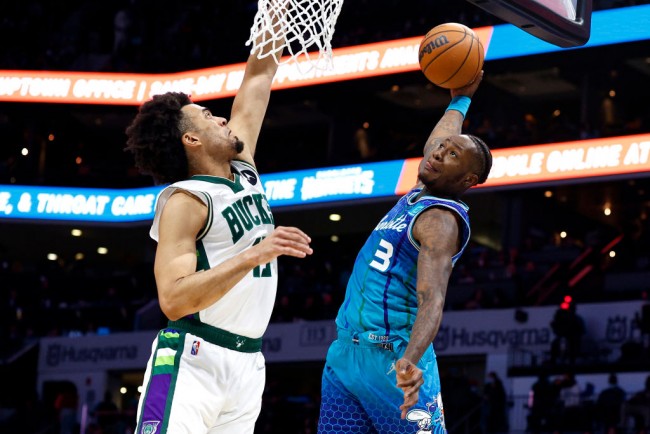 CHARLOTTE, NORTH CAROLINA – Terry Rozier #3 of the Charlotte Hornets attempts a dunk against Jordan Nwora #13 of the Milwaukee Bucks during the second half of the game at Spectrum Center on January 08, 2022 in Charlotte, North Carolina. (Photo : Jared C. Tilton/Getty Images)

Things are going from bad to worse for the Milwaukee Bucks as they crashed to their second defeat with a tough 103-99 loss to the Charlotte Hornets on Monday, January 10. The Bucks have hit a rough patch, losing four of their last five games. They dropped to fourth place in the Eastern Conference standings with a 26-17 record.

Rozier, Ball star for Hornets in win over Bucks

For the second time in three nights, the Bucks had difficulty stopping the Hornets’ balanced attack. Four Charlotte starters scored double figures, with Terry Rozier taking center stage in their latest showdown. He scored 27 points on 8 of 17 shooting from the field, including 4 of 11 from deep. Rozier also had seven rebounds, four assists, and two steals in 40 minutes of action.

However, LaMelo Ball made the biggest play of the night, scoring the go-ahead basket with 15 seconds remaining in the game clock. He drove across the lane and swept the ball above his head before sinking a tough 10-foot running jumper to give Charlotte the lead for good.

Ball was exceptional in the second half, scoring 18 of his 23 points during this period. Miles Bridges was outstanding as usual for the Hornets, posting a double-double with 17 points and 11 rebounds. He sank the final two free throws that sealed the win for Charlotte. Gordon Hayward also contributed, racking up 14 points, four rebounds, three assists, one steal, and one block.

The Hornets needed every bit of their production as they missed the services of top reserve Kelly Oubre Jr. The veteran forward was placed on the league’s health and safety protocols hours before the start of the game due to a positive COVID-19 test. He has been a vital cog for the Hornets this season, averaging 16.6 points, 3.9 rebounds, and 1.2 assists per game. Oubre is shooting at a high 45 percent clip, including 37 percent from beyond the arc.

The Hornets dealt with the loss of Oubre superbly, racing to a 28-19 lead after the first quarter. However, the Bucks battled back strongly in the second quarter as they entered the halftime break with a 48-47 lead.

There is no quit with the Bucks, who made a furious fightback in the fourth quarter. They eventually tied the game with 38.8 seconds left after a crucial four-point sequence by Giannis Antetokounmpo and Wesley Matthews. The Hornets survived the Bucks’ rally to win for the sixth time in the last eight games.

Novak Djokovic is a Free Man: Judge Rules in Favor of Serb as Australian Open Bid is Back On : OTHER : Sports World News