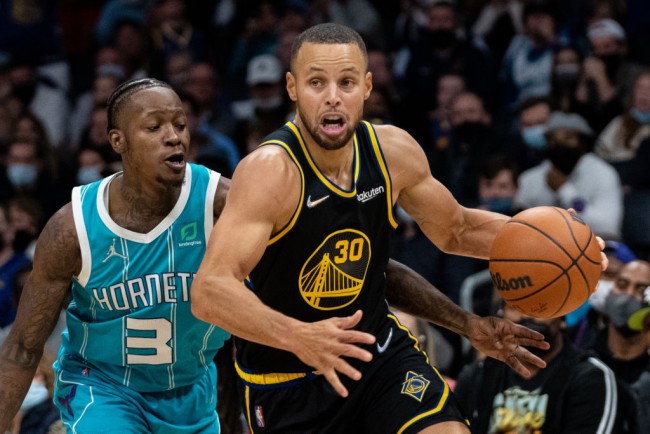 CHARLOTTE, NORTH CAROLINA – Stephen Curry #30 of the Golden State Warriors drives to the basket while guarded by Terry Rozier #3 of the Charlotte Hornets during the fourth quarter of their game at Spectrum Center on November 14, 2021 in Charlotte, North Carolina. (Photo : Jacob Kupferman/Getty Images))

The Golden State Warriors had their seven-game winning streak snapped on Sunday night with a stinging 106-102 loss to the Charlotte Hornets. LaMelo Ball, Terry Rozier, and Miles Bridges starred for the Hornets, who improved to 8-7 after winning three consecutive games.

Bridges had an excellent all-around performance, scoring 22 points, grabbing eight rebounds, and dishing out three assists for the Hornets. Ball recorded 21 points, seven rebounds, and five assists, while Rozier scored 20 points, all of which came in the second half.

The action was back-and-forth between the two teams, with Sunday’s game featuring 25 lead changes. Neither team led by at least eight points in this game which was knotted at 102 points apiece following Draymond Green’s basket with 44.7 seconds remaining.

Bridges quickly responded to Green’s equalizer, scoring a mid-range hook shot with 39.7 seconds left to hand Charlotte a 104-102 lead. The Warriors had a grand opportunity to tie the game with 28 seconds remaining, but Kevon Looney missed his free throws.

There is no quit with Golden State, however, and the Warriors were given another lifeline when Draymond Green forced Rozier to a jump ball after the Hornets guard was trapped near the sideline at midcourt.

Draymond Green lost a huge late fourth quarter jumpball to Terry Rozier. He said the ref was still talking when he threw it. Here’s the play/soundbite. pic.twitter.com/rtV1l3s9oQ

The 6-foot-1 Rozier made the play of the game, though, as he won the jump ball over the 6-foot-6 Green, with Hornets forward Jalen McDaniel coming down with the possession. The Warriors were forced to foul Rozier with 12.7 seconds left. He made no mistake from the free throw line to give Charlotte a two-possession lead and seal the win for the Hornets.

It was a disappointing defeat for the Warriors, who lost for the first time on the road this season. The Warriors are coming off a long eight-game homestand where they posted a 7-1 record. Next up for Golden State is a blockbuster showdown with Eastern Conference powerhouse Brooklyn Nets on Tuesday night.

Golden State’s loss was Phoenix’s gain as the Suns trimmed the Warriors’ lead in the Western Conference standings to just 1.5 games. The Phoenix Suns now hold the longest winning streak in the NBA this season as they extended their unbeaten run to eight games with a resounding 115-89 victory over the Houston Rockets.

Devin Booker and JaVale McGee led the Suns, who handed the Rockets their 11th straight loss. Booker recorded 26 points and six assists while McGee registered an impressive double-double with 19 points and 14 rebounds. McGee was a beast down low, knocking down nine of his 12 field goal attempts. In this contest, the Suns were red-hot, shooting 43 percent from the field and 14 of 40 from deep.

Crypto Laws in India? What will Happen in this Winter Session?

Big Data Analytics in Retail is Projected to Reach US$2.6 Billion by 2028