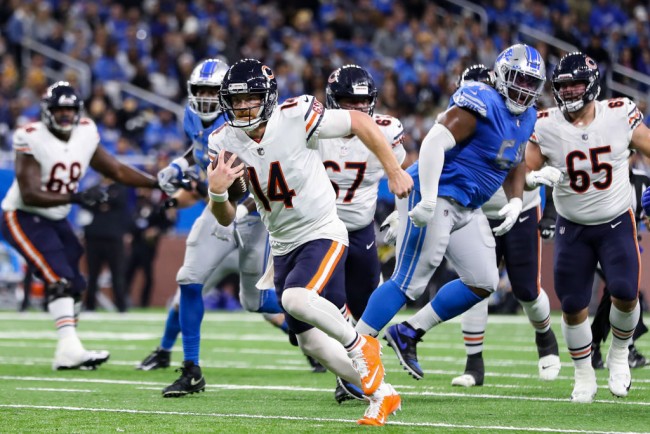 DETROIT, MICHIGAN – Andy Dalton #14 of the Chicago Bears scrambles for a first down against the Detroit Lions during the fourth quarter at Ford Field on November 25, 2021 in Detroit, Michigan. (Photo : Mike Mulholland/Getty Images)

Detroit’s winless season continued on Thanksgiving Day as the Lions suffered a gut-wrenching 16-14 loss to the Chicago Bears at Ford Field. Cairo Santos was the one who broke Lions’ hearts in Week 12, kicking the game-winning 28-yard field goal as time expired to help the Bears snap their five-game losing skid.

It was a huge win for Bears head coach Matt Nagy, who answered questions about his head coaching status less than two days before the game against the Lions. Team chairman George McCaskey assured Nagy that his coaching job is secure at the moment, and the report that he was headed for the sack after the Lions game was not true.

Apart from the Nagy rumors, the Bears also had to deal with the injury to franchise quarterback Justin Fields. Tests on Thursday morning showed the rookie signal-caller having multiple cracked ribs, which he suffered during the Bears’ Week 11 loss to the Baltimore Ravens.

That ruled him out for the game against the Lions, with Andy Dalton getting the nod to be the Bears’ starting quarterback. He was solid in his emergency start, completing 24 of 39 passes for 317 yards with one touchdown and one interception. His lone touchdown pass came late in the first half, with Jimmy Graham clinching a 17-yard score.

The Lions fought back furiously in the second half, taking a 14-13 lead following Jared Goff’s 17-yard touchdown pass to T.J. Hockenson. Goff, who missed the Lions’ previous game against the Cleveland Browns because of an oblique injury, completed 21 of 25 passes for 171 yards with two touchdowns and no interceptions.

Bears run out the clock with an 8:30 drive to sink Lions

Unfortunately for Detroit, Goff was not able to perform any heroics in the fourth quarter as the Bears were able to run out the clock with their final drive. Chicago drove the ball 18 plays over the final 8:30 of the contest, helping set up Santos’ game-ending field goal try.

Much of the credit should be given to Dalton, who engineered that game-winning drive. He became the first Bears quarterback to record a 300-yard passing game since Nick Foles accomplished that feat in Week 9 of the 2020 season.

It is back to the drawing board for the Lions, who lost for the fifth time at home this season. To make matters worse for Detroit, star running back D’Andre Swift suffered a right shoulder injury during the second quarter and was not cleared to return against the Bears.

According to head coach Dan Campbell, Swift sprained that same shoulder a couple of weeks ago. Swift entered Thursday’s contest with 555 rushing yards and four scores. He proved to be a threat through the air, catching 43 passes for 420 yards and two touchdowns through the Lions’ first 10 games.