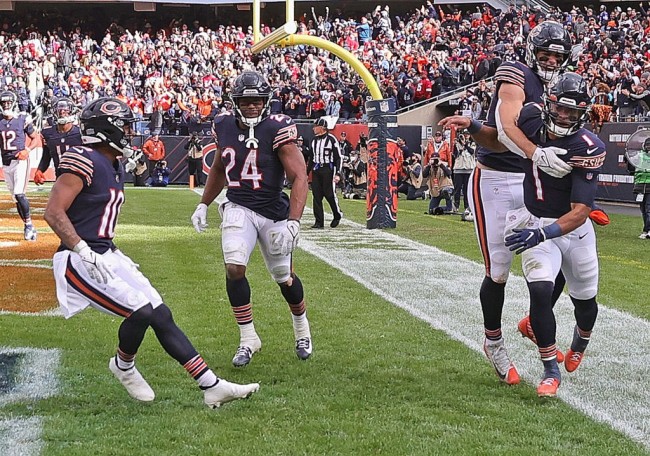 Two of the league’s most popular teams will be facing each other on Monday Night Football in Week 9 as Justin Fields, and the rest of the Chicago Bears visit the Pittsburgh Steelers at the Heinz Field. Who has the advantage in this Bears vs Steelers showdown? Here’s an in-depth breakdown of this blockbuster clash.

Things are going from bad to worse for the Chicago Bears as they absorbed their third consecutive defeat with a 33-22 loss to the San Francisco 49ers in Week 8. The Bears now head into Week 9 with a 3-5 slate, four games behind leaders Green Bay Packers in the NFC North standings.

This coming Sunday, the Bears will look to get their season back on track when they face the red-hot Pittsburgh Steelers. For the Bears to end their losing skid, they will need to do a much better job on the defensive end. They surrendered 467 total yards in the loss to the 49ers, 322 of which came through the air.

It is also crucial for the Bears that Justin Fields gets his game going against the Steelers. He was superb in the loss to San Francisco, throwing for 175 yards and a touchdown and running for 103 yards and a score. He became the first Bears quarterback since Bobby Douglass in 1973 to record 100 yards rushing in a game.

Fields will look to utilize his ground game against a Steelers side that is 12th in the NFL in rushing defense, allowing 106.0 yards per game this season.

Pittsburgh extended its winning streak to three games with an impressive 15-10 come-from-behind victory over the Cleveland Browns in Week 8. It was a critical win for the Steelers, who trail leaders Baltimore by just 1.5 games in the AFC North with their 4-3 record. They also gained some ground on the Cincinnati Bengals, who suffered a shocking loss to the New York Jets.

Ben Roethlisberger once again was the thorn in the Browns’ side, completing 22 of 34 passes for 266 yards, including the game-winning two-yard touchdown pass on fourth down to rookie Pat Freiermuth in the fourth quarter.

ARE YOU SERIOUS MUTH?!

With the win, Big Ben improved to 24-3-1 in his career as a starter against the Browns and 12-2-1 when facing them in Cleveland. The Steelers grabbed the win without kicker Chris Boswell in the second half after getting hurt on a trick play late in the second quarter.

Boswell was a huge loss for the Steelers as he has been the league’s most accurate kicker since 2019, making 94 percent of his attempts (60 of 64). The Steelers had to go for two-point conversions after their two touchdowns in the second half with Boswell sidelined, both of which failed to score.