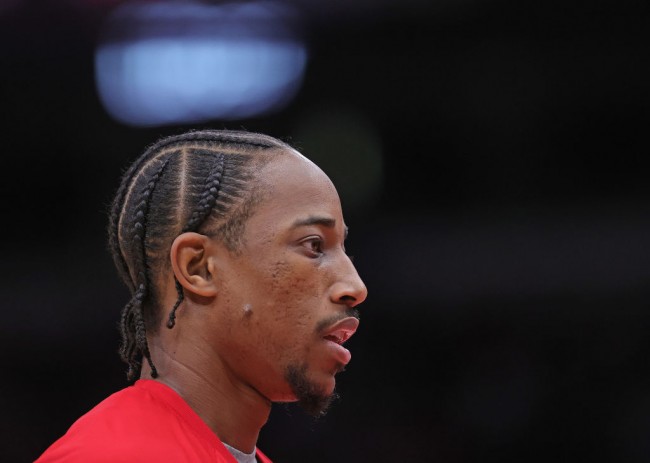 CHICAGO, ILLINOIS – DeMar DeRozan of the Chicago Bulls is seen during warm-ups before a game against the New Orleans Pelicans at the United Center on October 22, 2021 in Chicago, Illinois. (Photo : Jonathan Daniel/Getty Images)

The Chicago Bulls are off to a dream start in the 2021-22 NBA season, going 4-0 for the first time since the 1996-97 campaign. The Bulls reached that mark on Monday night with a thrilling 111-108 victory over the Toronto Raptors at the Scotiabank Arena.

They are now the last remaining unbeaten team in the Eastern Conference, fueling hopes of Bulls fans everywhere that a deep playoff run might be in store for this team. The Bulls have started 4-0 three times before, all of which came with the great Michael Jordan in the lineup.

The Bulls’ three key offseason additions have certainly played their part in this strong start by Chicago. DeMar DeRozan, Lonzo Ball, and Alex Caruso showed their worth in the game against the Raptors, making crucial contributions on both the offensive and defensive ends.

DeRozan was the Bulls’ leading man in the final period, scoring 11 of his 26 points in the fourth quarter to quell Toronto’s uprising. Lonzo Ball recorded 15 points and five assists and was solid from beyond the arc, burying five 3-point attempts.

Alex Caruso once again provided hustle plays for the Bulls, recording eight points and four steals. The Bulls’ defense has been a pleasant surprise, leading the league in steals with 41 thus far this season. According to Cleaning the Glass, they have allowed less than a point per possession this season, posting an impressive 97.1 defensive net rating.

This is a welcome change for Zach LaVine, who had never been a part of a four-game winning run at any point during his career in the NBA. The Bulls have never moved over .500 at any point during a season since March 2017, making this 4-0 start simply shocking.

That being said, the Bulls have benefited from an easy schedule to start the season. Their four wins have come against teams that are a combined 2-9 this campaign. The Bulls recorded two wins against the Pistons, who are still without top pick Cade Cunningham. They also defeated a New Orleans Pelicans team without Zion Williamson and a Toronto Raptors side with no Pascal Siakam.

The real test for Chicago begins this week when they start a tough six-game stretch. Next, they will face the New York Knicks, Utah Jazz, Boston Celtics, Philadelphia 76ers (twice), and the Brooklyn Nets.