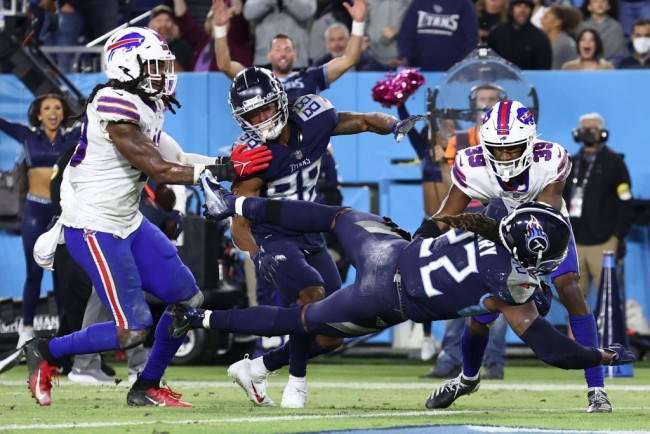 NASHVILLE, TENNESSEE – Running back Derrick Henry (#22) of the Tennessee Titans rushes for a touchdown against the Buffalo Bills during the fourth quarter at the Nissan Stadium on October 18, 2021 in Nashville, Tennessee. (Photo : Andy Lyons/Getty Images)

The Tennessee Titans moved two games clear atop the AFC South standings after a hard-fought win over the Buffalo Bills on Monday Night Football. They will look to extend that advantage even further when they host the Kansas City Chiefs in a marquee showdown between two of the best AFC teams. Here’s a breakdown of this Chiefs vs Titans game to see who has the edge in this pivotal AFC clash.

The Kansas City Chiefs that most NFL teams feared the past couple of seasons finally showed up during the second half of their game against the Washington Football Team. Trailing 13-10 at halftime, the Chiefs turned the screws on in the second half, outscoring Washington 21-0 in the third and fourth quarters to record a comprehensive 31-13 win.

The Chiefs gained some ground in the AFC West with their victory as they now trail leaders Las Vegas and LA Chargers by just one game heading into Week 7. They will look to keep the momentum going when they face the Tennessee Titans this coming Sunday.

The angle of this Patrick Mahomes throw is absurd 😳

One guy who needs to step up for Kansas City in Week 7 is Patrick Mahomes. He looked like the Mahomes of old in the second half of the Washington game, engineering three touchdown drives to help the Chiefs cruise to the easy win. He completed 32 of 47 passes for 397 yards and two touchdowns.

Mahomes threw two interceptions, however, increasing his tally in that department to eight this season. He is now on pace to throw 23 picks this year, which would equal his combined interception total from the last three seasons.

In a primetime classic, the Tennessee Titans delivered a huge statement win on Monday Night Football as they edged past the Buffalo Bills, 34-31. Derrick Henry starred for the Titans, rushing for 143 yards and three touchdowns against the Bills, including the game-winning score in the closing minutes of the fourth quarter.

DERRICK HENRY WITH A HAT-TRICK TO TAKE THE LEAD 😨

This season, Henry is making a solid case to be the league’s MVP as he became the first player to record 10 rushing touchdowns in his team’s first six games since LaDainian Tomlinson and Shaun Alexander accomplished that feat in 2005. Alexander won MVP honors that year, with Tomlinson taking the crown the following season.

Henry now has 783 rushing yards this season, 260 more than the tally of Nick Chubb, who is in second place. He will be licking his chops at the prospect of facing a Kansas City side that is sixth-worst in the NFL in rushing defense, allowing 133.2 yards per game on the ground this season.