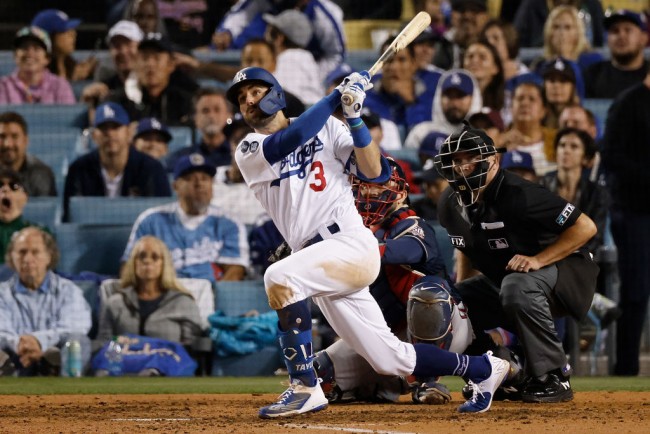 Chris Taylor made sure the 2021 National League Championship Series will head back to Atlanta, hitting three homers in Game 5 to lead the Los Angeles Dodgers to a resounding 11-2 win over the Braves. The Dodgers now trail the Braves, 2-3, in the NLCS ahead of the pivotal Game 6.

Taylor made history with his performance on Thursday night, becoming the first player in MLB history with three home runs in a game when his team faced elimination. Taylor’s explosion could not have come at a more opportune time for the Dodgers, who trailed 3-1 in the series and were down 2-0 early to Atlanta in Game 5.

Taylor went yard for the second time in the fifth inning, hitting a two-out, two-run homer off Atlanta reliever Chris Martin to give Los Angeles a 6-2 lead. He made it a hat-trick of homers in the seventh inning, hitting a solo shot off lefty Dylan Lee to extend the Dodgers’ lead to five runs.

Taylor got his first curtain call after that blast with the Dodgers faithful rightfully honoring his exploits. He single-handedly kept the Dodgers’ World Series dreams alive, driving in six of LA’s first seven runs in Game 5. Taylor’s six RBIs were the second-most by an LA Dodger in a playoff game, falling one run shy of Kiké Hernández’s record that he set in Game 5 of the 2017 NLCS against the Chicago Cubs.

Dodgers dreaming of another miracle comeback against Braves

Taylor became the 11th player in the history of the majors to record three homers in a single postseason game, joining legends such as Reggie Jackson, Babe Ruth, Albert Pujols, George Brett, and Adrian Beltre in that exclusive list. He gave the Dodgers belief that they could pull off the impossible again and record another come-from-behind series win over the Braves.

There is something about the Dodgers and their never-say-die attitude in October. They have now won seven straight elimination games, the third-longest streak in the history of the postseason. The Braves know that full well, squandering a 3-1 lead over the Dodgers in last year’s NLCS that prevented them from clinching their first NL pennant since 1999.

The main difference now is that Atlanta will play Games 6 and 7 at home in front of Braves fans. The Dodgers will still fancy their chances in Game 6 as ace Max Scherzer will be their starting pitcher for that pivotal encounter. Starting for Atlanta in that all-important Game 6 is Ian Anderson.