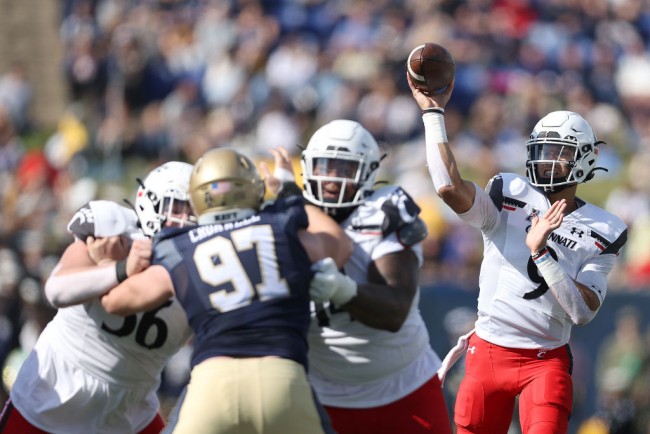 The Cincinnati Bearcats maintained their No. 2 ranking in the AP Top 25 poll after a narrow win over Navy in Week 8. The Bearcats will look to cement their standing in the top 2 this Saturday when they face the Tulane Green Wave. Here’s our preview for a breakdown of this Cincinnati vs Tulane Week 9 game.

Momentum is with Cincinnati heading into Saturday’s matchup against Tulane after the Bearcats defeated the Navy Midshipmen, 27-20, in Week 8. It was an important victory for the Bearcats, who improved their season record to a perfect 7-0. They had won their first seven outings by an average of 26.7 points.

Providing the impetus for Cincinnati’s scorching start is its outstanding defense. They are third in the nation in scoring defense, allowing just 14.6 points per game this season. The Bearcats were tested, though, by Navy in their last game, with the Midshipmen outgaining them in total yards (308-271).

For the Bearcats to preserve their unbeaten record against the Green Wave, they will need Jerome Ford to continue his stellar play. He rushed for 90 yards and a touchdown on 15 carries in the win against Navy.

Ford has been unstoppable of late on the ground, rushing for 428 yards and seven touchdowns in Cincinnati’s last three games. He will be licking his chops at the prospect of facing a Tulane side that is 107th in the FBS in rushing defense, allowing 193.7 yards per game this season.

Related Article: AP Top 25 Poll: Alabama Jumps Past Oklahoma to No. 3; Oregon Soars to No. 7 Ahead of Week 9

The Tulane Green Wave crashed to their fifth consecutive defeat on Saturday with an embarrassing 55-26 loss to the SMU Mustangs. The Green Wave had no answer for Tanner Mordecai, who threw for 427 yards and three touchdowns. It was another disappointing display by the Green Wave, who dropped to 1-6 this season and 0-3 in conference play.

Things are bound to get more challenging for them in Week 9 as they will next face a Cincinnati team that is 10th in the nation in scoring, averaging 41.1 points per game this campaign. The pressure then is on quarterback Michael Pratt to deliver the goods in this key clash. He completed 11 of 22 passes for 234 yards with three touchdowns in the loss to SMU. Pratt’s status for Saturday’s game remains uncertain, however, as he is still in concussion protocol.

The Green Wave will have their work cut out for them against the Bearcats, who possess one of the nation’s top cornerbacks in Ahmad “Sauce” Gardner. He has yet to surrender a touchdown pass in his 879 career coverage snaps. Gardner already has two interceptions this season. The Bearcats are ranked 12th nationally in interceptions with 12.

Top M.Sc. in Data Science Colleges in India to Apply for 2022