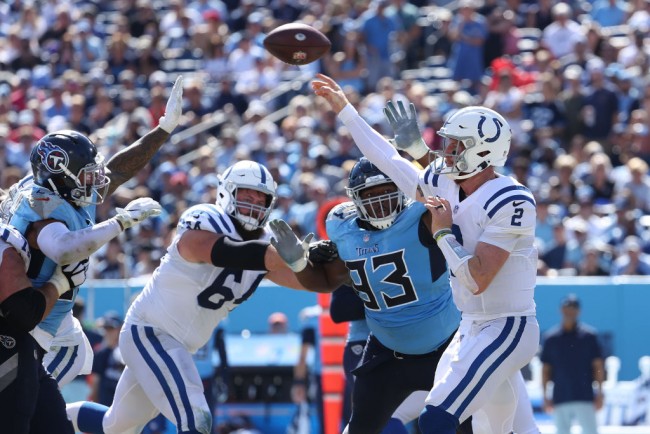 NASHVILLE, TENNESSEE – Quarterback Carson Wentz (#2) of the Indianapolis Colts passes the ball in the second half of the game against the Tennessee Titans at the Nissan Stadium on September 26, 2021 in Nashville, Tennessee. (Photo : Andy Lyons/Getty Images)

Carson Wentz has had a horrible start to his Indianapolis career, losing his first three NFL games with the Colts. He hopes to stop that losing rut this coming Sunday when the Colts face an injury-riddled Miami side. Who will prevail in this Colts vs Dolphins clash?

The alarm bells are starting to ring for the Indianapolis Colts, who sit at the bottom of the AFC South standings with a horrendous 0-3 record after a 25-16 loss to division rivals Tennessee on Sunday. The Colts managed to lose the game despite winning the turnover battle, 3-0.

The Maniac picks off Tannehill! 😈

Carson Wentz started against the Titans despite spraining both of his ankles in Week 3 against the Rams. Wentz’s mobility was affected, though, as he didn’t run even once against Tennessee. That made it easier for the Titans to stop Wentz, who finished the game with just 194 yards passing.

What proved to be the downfall of the Colts in this contest was their inability to score touchdowns in the red zone. Indianapolis twice had first-and-goal opportunities during the second half inside the Titans’ 9, but they just managed to score field goals in both of those possessions.

They will need to be more efficient against the Dolphins, who are eighth-worst in the NFL in total defense, allowing 401.3 yards per game this season.

Will Fuller’s status for the Week 4 clash against Indianapolis remains uncertain after he missed the Dolphins’ practice on Wednesday due to chest and elbow injuries. He suffered those injuries last Sunday against the Las Vegas Raiders during overtime. Fuller landed awkwardly after fully extending for an incomplete pass in that 31-28 loss.

Fuller showed what he could do for the Dolphins in that narrow defeat, reeling in three catches for 20 yards and scoring the game-tying 2-point conversion in his first game for Miami since signing a one-year, $10 million deal this past offseason.

MIAMI COMPLETES THE 2 POINT CONVERSION TO WILL FULLER. We’re going to OT. Dolphins got lucky on this drive but showed a lot of grit. Wow. pic.twitter.com/DdjxAOUO5B

He wasn’t available for the Dolphins’ season opener due to a one-game suspension. He also did not play for Miami in Week 2, with Fuller citing personal reasons. Fuller has missed 29 games due to suspension or injury during his six-year NFL career.

Injuries have ravaged the Dolphins at the start of the 2021 season, with quarterback Tua Tagovailoa the biggest name on their injured reserve list. In Tua’s absence, Jacoby Brissett did an admirable job against the Raiders, completing 32 of 49 passes for 215 yards with no touchdowns and no interceptions.

Brissett will fancy his chances against a Colts defense that has allowed 12.71 yards per completion, the second-highest mark in the NFL this season. The Colts’ pass rush has been abysmal thus far, with their quarterback pressure rate only at 27.5 percent on dropbacks, 26th in the NFL.

10 Ways by Which Big Data Can Save Our Environment