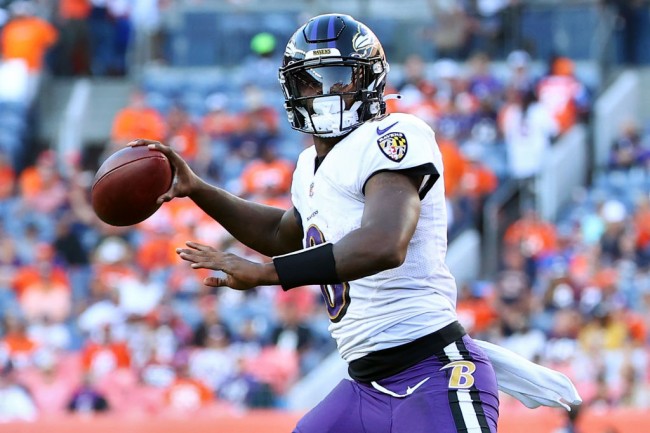 DENVER, COLORADO – Quarterback Lamar Jackson of the Baltimore Ravens looks to make a pass play as he scrambles against Shelby Harris of the Denver Broncos in the second half at the Empower Field at Mile High on October 03, 2021 in Denver, Colorado. (Photo : Jamie Schwaberow/Getty Images)

History beckons for the Baltimore Ravens in Week 5 as they look to become the first team in NFL history to record 100 or more yards rushing in 44 consecutive games. Can Indianapolis stop the run in this Colts vs Ravens clash, or will Lamar Jackson and co. wreak havoc again on the ground?

The Indianapolis Colts finally secured their first win of the season on Sunday, recording a convincing 27-17 victory over the Miami Dolphins. It was a critical victory for the Colts, who suffered gut-wrenching losses to the Seattle Seahawks, Los Angeles Rams, and the Tennessee Titans in their previous three games.

One man who is relieved with Indy’s win is Carson Wentz. He entered the Week 4 clash against Miami with a personal seven-game losing streak, having lost in his final four appearances with the Philadelphia Eagles last season and his first three starts with the Colts this season.

Carson Wentz and Mo Alie-Cox connect for their SECOND TD 🎯

On Sunday, he was solid against the Dolphins, completing 24 of 32 passes for 228 yards and a pair of touchdowns. The Colts got their running game going as well, with Jonathan Taylor rushing for 103 yards and a score. However, Indianapolis’ defense stole the show, holding Miami to just 15 total yards and no points in the second and third quarters.

They will need that same kind of defensive effort against a Baltimore side that’s flying high at the moment. The Ravens are fourth in the NFL in total offense, averaging 420.0 yards per game this season.

Baltimore extended its winning streak to three games on Sunday with an emphatic 23-7 victory over the Denver Broncos. It was an impressive win by the Ravens, who handed the Broncos their first loss of the season.

Lamar Jackson led the way for the Ravens in this Week 4 showdown, completing 22 of 37 passes for 316 yards with one touchdown and no interceptions. It was a historic performance by Jackson, who became the first quarterback to throw for at least 1,000 yards and rush for 250 yards in the season’s first four games.

Sunday’s game was only the second time in Jackson’s career that he threw for 300 yards. What made that feat even more impressive is that he did it against a Denver defense that surrendered an average of just 162.3 passing yards in the first three games of the season.

Jackson’s arm is starting to become a major problem for opposing defenses, with the former NFL MVP completing 63.6 percent of his passes for 1,077 yards this season. Jackson has racked up four touchdowns and three interceptions with a passer rating of 89.3.