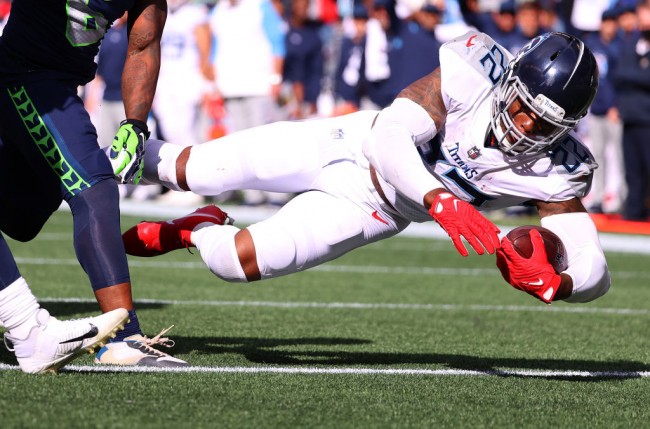 SEATTLE, WASHINGTON – Running back Derrick Henry (#22) of the Tennessee Titans dives into the endzone for a touchdown in the fourth quarter in the game against the Seattle Seahawks at the Lumen Field on September 19, 2021 in Seattle, Washington. (Photo : Abbie Parr/Getty Images)

This coming Sunday, a critical AFC South matchup will be heading our way as the Tennessee Titans host the Indianapolis Colts at the Nissan Stadium. Can the Colts end their losing rut in this game, or will the Titans hand them more misery? Read on below for a preview of this Colts vs Titans showdown.

Things are going from bad to worse for the Indianapolis Colts as they stumbled to their second consecutive defeat on Sunday with a gut-wrenching 27-24 loss to the Los Angeles Rams. The Colts now start the campaign 0-2, the first time that has happened in Frank Reich’s four seasons as the team’s head coach.

They will look to get their season back on track when they lock horns with the Tennessee Titans this coming Sunday. However, the status of starting quarterback Carson Wentz remains uncertain for that Week 3 clash after spraining both of his ankles in the loss to the Rams.

Wentz’s right ankle suffered the most damage after Rams star defensive lineman Aaron Donald took him to the ground with less than eight minutes remaining in the game. Such was the severity of Wentz’s ankle injury that he was not able to return to finish the game.

Carson Wentz’ ankle takes a nasty turn after Aaron Donald rips him to the ground. pic.twitter.com/ChjIgulcMU

Wentz has completed 45 of 69 passes for 498 yards through the first two games of the season with three touchdowns and one interception. However, the Colts’ offensive line has failed to protect Wentz, with the former Eagles quarterback getting sacked six times and also hit an additional 21 times in the losses to the Rams and Seahawks.

The Tennessee Titans finally recorded their first win of the season with a thrilling 33-30 come-from-behind overtime victory over the Seattle Seahawks on Sunday. It was a morale-boosting win for the Titans, who rallied from a 14-point deficit in the fourth quarter.

Next up for Tennessee is a showdown with AFC South rivals Indianapolis. Expected to lead the Titans in that critical Week 3 matchup is running back Derrick Henry. He finished with 182 yards rushing in the win against Seattle, the most allowed by the Seahawks during coach Pete Carroll’s tenure with the franchise.

Couldn’t hold him back for long.

It was a sensational performance by Henry, who sparked the comeback by scoring two touchdowns in the final quarter. King Henry now has four career games with at least three or more touchdowns and 150 rushing yards. Only Barry Sanders (6), Jim Brown (6), and LaDainian Tomlinson (5) have more such games than Henry.

Henry was a dual threat in the win against Seattle as he also caught a career-high six passes for 55 yards. Henry will face a tougher test against an Indianapolis defensive line that has allowed just one rushing touchdown so far this season.

The Titans need to get Henry going quickly against the Colts. They are a perfect 10-0 in games where Henry has rushed for at least 150 yards.

It wasn’t just Henry who starred for the Titans in Week 2. Julio Jones also had a breakout game as he recorded the 59th 100-yard game of his career, nabbing six receptions for 128 yards.

Titans win and cover the spread.

Top AI Researchers in India to Influence Your Mind in 2021