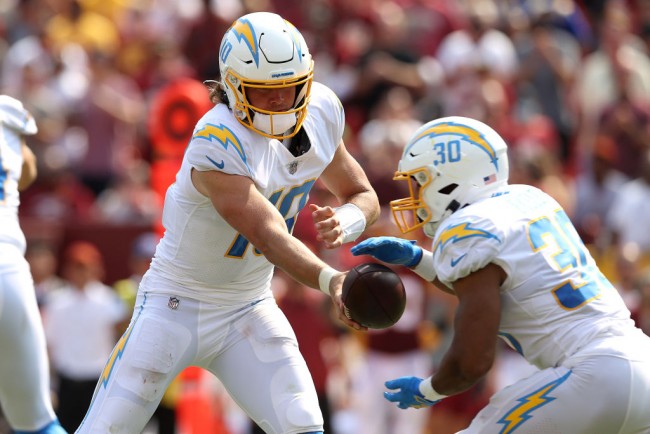 LANDOVER, MARYLAND – Quarterback Justin Herbert (#10) of the Los Angeles Chargers hands the ball off to running back Austin Ekeler (#30) against the Washington Football Team at the FedExField on September 12, 2021 in Landover, Maryland. (Photo : Rob Carr/Getty Images)

The Chargers‘ 2021 NFL season is off to a promising start after Los Angeles defeated Washington by four points in their opening game. This coming Sunday, the Chargers will look to build on that victory when they lock horns with the Dallas Cowboys in a blockbuster matchup at the SoFi Stadium.

Just like in their opening game against the Tampa Bay Buccaneers, the Cowboys offensive line once again is the biggest question mark heading into Dallas’ Week 2 clash against the Los Angeles Chargers.

The good news for Dallas is that six-time Pro Bowl right guard Zack Martin will be back in action this coming Sunday after missing the season opener due to COVID-19. However, it is still unclear what position Martin will play in his return as the Cowboys will be without right tackle La’el Collins for the next five games due to suspension after violating the NFL’s substance-abuse policy.

Martin’s return is very important for the Cowboys’ running game, which was non-existent in the 31-29 loss to Tampa Bay. Dallas managed just 60 rushing yards in the Week 1 defeat, with Dak Prescott opting to go with the aerial attacks in Tampa.

With Martin back, the Cowboys can get Ezekiel Elliott more touches in the game against the Chargers. He just had 11 carries for 33 yards and two catches for six yards in the loss to the Buccaneers, the second-lowest combined production of Elliott’s six-year NFL career.

The Cowboys still nearly grabbed the upset win thanks to the brilliance of Prescott, who threw for 403 yards and three touchdowns in his first game back from injury. He will be without one of his passing weapons in Week 2 as Michael Gallup was placed on the injured reserve due to a calf strain.

Also, a major doubt for Week 2 is pass rusher Randy Gregory, who has been placed on the reserve/COVID-19 list.

The Chargers O-line is also the talk of the town in Los Angeles, but for all the good reasons. Rashawn Slater impressed in his NFL debut, with the rookie left tackle surrendering zero pressures on 49 pass-blocking snaps in the win against Washington. Slater wasn’t called for any penalties either, not bad for a guy who was playing in his first football game since November 2019.

With Slater and the rest of the Chargers’ offensive line in impeccable form, Justin Herbert was able to close out Washington, converting four third downs in LA’s final drive to run out the final 6:43 of the game. Herbert finished the game with 337 passing yards and one touchdown.

Herbert was tremendous, particularly on third down, going 14 of 19 on pass attempts with that scenario. He will fancy his chances this coming Sunday against a Dallas secondary that allowed 379 yards through the air in Week 1.

The chargers beat the Cowboys by a field goal.