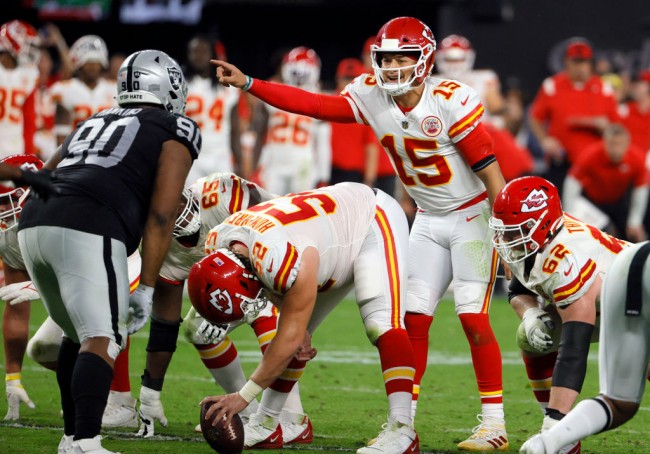 LAS VEGAS, NEVADA – Quarterback Patrick Mahomes #15 of the Kansas City Chiefs calls a play at the line of scrimmage during their game against the Las Vegas Raiders at Allegiant Stadium on November 14, 2021 in Las Vegas, Nevada. The Chiefs defeated the Raiders 41-14. (Photo : Ethan Miller/Getty Images)

A blockbuster showdown will be heading our way in Week 11 as the surging Kansas City Chiefs host the Dallas Cowboys in a battle of division leaders. Can Patrick Mahomes extend the Chiefs’ winning streak to four games, or will Dak Prescott hand Dallas a vital road victory? Here’s a preview of the Cowboys vs Chiefs matchup.

The Dallas Cowboys will head to their showdown against the Kansas City Chiefs with momentum on their side after crushing the Atlanta Falcons, 43-3, in Week 10. It was a huge bounce-back win for the Cowboys, who suffered a humiliating 30-16 loss to the Denver Broncos after their bye week.

The Cowboys maintained their 3.5-game lead over the Philadelphia Eagles in the NFC East standings with the victory. The Cowboys’ defense finally showed up after a disastrous performance in Week 10, holding the Falcons to just 214 total yards, which was one more than their season low. Atlanta had difficulty moving the chains against Dallas, recording 11 first downs and going 1 of 11 on third down opportunities, both season worsts.

Dallas’ offense also woke up from its slumber, scoring 29 of their 43 points in the second, which was the Cowboys’ highest-scoring quarter in franchise history. The Cowboys built a 36-3 advantage at halftime, which was their biggest lead after the opening two quarters since 1971.

The Cowboys will be licking their chops at the prospect of facing a Kansas City Chiefs team that is seventh-worst in the NFL in total defense, allowing 373.2 yards per game this season.

The Kansas City Chiefs that most NFL teams feared in the past years finally showed up during Week 10 against the Las Vegas Raiders. The Chiefs went berserk against their division rivals as they destroyed the Raiders, 41-14, at Allegiant Stadium.

It was a critical win for the Chiefs, who are now back on top of the AFC West standings with a 6-4 record. The Chiefs benefited as the Broncos and Chargers also lost in Week 10.

Patrick Mahomes picked the perfect time to regain his old form as this divisional matchup had massive playoff implications. He completed 35 of 50 passes for 406 yards with five touchdowns and no interceptions in the win against the Raiders.

The Chiefs made a huge tactical adjustment, with Mahomes showing more patience in the pocket and relying more on check down plays. Before Kansas City’s final scoring drive, Mahomes had completed 26-of-32 passes for 219 yards and three touchdowns when attempting throws below 10 air yards.

It will be vital for the Chiefs to employ that same strategy against a Dallas defense that is allowing 252.8 yards per game through the air season.

5 Top Tech Stocks to Invest As Soon As Possible on November 16th, 2021

Bitcoin is Off the Grid! Altcoins Season is Back this November