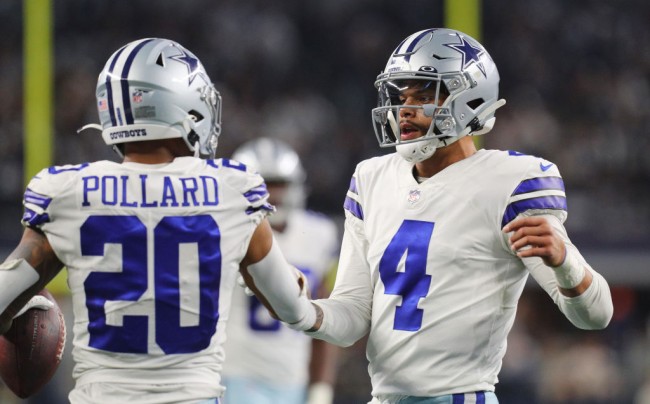 ARLINGTON, TEXAS – Dak Prescott #4 of the Dallas Cowboys interacts with teammate Tony Pollard #20 during the second quarter of the NFL game between Las Vegas Raiders and Dallas Cowboys at AT&T Stadium on November 25, 2021 in Arlington, Texas. (Photo : Richard Rodriguez/Getty Images)

It was not a happy Thanksgiving for both the Dallas Cowboys and the New Orleans Saints as they suffered defeats to Las Vegas and Buffalo, respectively. The Cowboys and the Saints will look to end their respective losing woes when they square off in this week’s edition of Thursday Night Football. Here’s a breakdown of the Cowboys vs Saints game to see who has the edge in this NFC clash.

The Dallas Cowboys lost for the third time in four games, suffering a gut-wrenching 36-33 overtime defeat at the hands of the Las Vegas Raiders on Thanksgiving Day. The Cowboys had no answer for Raiders quarterback Derek Carr, who threw for 373 yards and a touchdown in Week 12.

It was another disappointing defeat for the Cowboys, whose lead atop the NFC East standings remain 2.5 games following Philadelphia’s loss to the New York Giants. The Cowboys’ bid to grab the top seed in the conference also took a huge hit with the loss as they trail the NFC-leading Arizona Cardinals by two games entering Week 13.

The good news for the Cowboys is that they will likely get some of their key players back against the Saints. Top receivers Amari Cooper and CeeDee Lamb are both expected to return for that critical Week 13 clash. Cooper missed the Thanksgiving game because of COVID-19, while Lamb failed to recover from a concussion.

It is crucial for the Cowboys that they lessen their penalties against the Saints. In Thursday’s game, the Cowboys were penalized 14 times, with Dallas awarded a franchise-record 166 yards off those penalties. Cowboys cornerback Anthony Brown was responsible for most of those penalty yards, committing four costly pass interference fouls in the loss to the Raiders.

New Orleans’ losing woes show no sign of ending as the Saints crashed to their fourth straight defeat with a humiliating 31-6 loss to the Buffalo Bills on Thanksgiving Night. The Saints had difficulty stopping Josh Allen, who completed 23 of 28 passes for 260 yards with four touchdowns and two interceptions.

The Saints are now 0-4 since recording an upset win over the defending Super Bowl champion Tampa Bay Buccaneers at Caesars Superdome in Week 8. Jameis Winston suffered a season-ending knee injury in that game, and the Saints offense has struggled since then. They looked out of sorts in the loss to Buffalo, managing just 190 total yards in the primetime game.

New Orleans entered Week 12 with one of the league’s best rushing defenses, but the Saints could not stop Buffalo’s run game, with the Bills racking up 113 yards on the ground. That enabled Buffalo to dominate the time of possession, with the Bills controlling the football for 34 minutes and 38 seconds.

For the Saints to end their losing skid against the Cowboys, they will need to get a much-improved showing from Trevor Siemian. He struggled mightily in the loss to the Bills, throwing for just 163 yards and a touchdown with one interception.

NBA Hands One Game Suspension on LeBron James for Hit on Isaiah Stewart; to Miss Lakers vs Knicks at MSG

10 Cities that will Become Cryptocurrency Hotspots in 2022