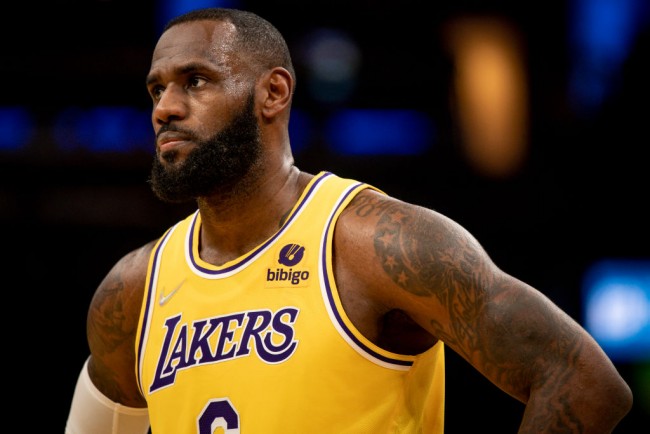 BOSTON, MASSACHUSETTS – NOVEMBER 19: LeBron James #6 of the Los Angeles Lakers looks on during a game against the Boston Celtics at TD Garden on November 19, 2021 in Boston, Massachusetts. (Photo : Maddie Malhotra/Getty Images)

The Golden State Warriors stretched their winning run to three games with a thrilling 105-102 victory over the hapless Detroit Pistons. The Warriors managed to pull off the win even without key players Steph Curry, Draymond Green, Andre Iguodala, and Otto Porter Jr., who were all nursing various injuries.

Warriors escape Detroit with a win even without key stars

Curry suffered a bruised hip in the win against the Nets while Green had a bruised thigh. Iguodala sat out Friday’s game because of right knee soreness while Porter Jr. missed the game against the Pistons due to a left foot issue.

Jordan Poole and Andrew Wiggins stepped up big time for the Warriors, who improved their record to an NBA-best 14-2 slate. Poole scored a season-high 32 points, 22 of which came in the first half. He also recorded seven rebounds and two assists. Wiggins scored 27 points on 9 of 19 shooting from the field.

Nemanja Bjelica and Gary Payton II were the other players who scored in double figures for the Warriors, adding 14 and 12 points, respectively. Even with their undermanned lineup, the Warriors built a 16-point lead entering the fourth quarter.

The Pistons made a furious comeback, though, in the payoff period, cutting Golden State’s lead to three points in the closing seconds. The Pistons could have sent the game into overtime but Jerami Grant and Frank Jackson missed their 3-point attempts down the stretch. It was a disappointing result for the Pistons, who dropped to 4-11 with the loss. Their struggles at home continued with the Pistons losing six of their first eight games at Little Caesars Arena.

Another team that is struggling at the moment is the Los Angeles Lakers. They crashed to their third consecutive defeat with a humiliating 130-108 loss to the Boston Celtics on Friday night. Not even the return of LeBron James can rescue the Lakers from their slump as their record dipped below .500 with an 8-9 slate.

The Lakers had no answer for Jayson Tatum, who led all scorers with 37 points. Marcus Smart, Dennis Schroder and Al Horford also contributed for Boston, combining for 61 points in the one-sided home win.

Anthony Davis carried the scoring cudgels for the Lakers with 31 points on 12 of 21 shooting from the floor. James, who missed the Lakers’ previous eight games because of an abdominal injury, added 23 points in 32 minutes of action.

A growing concern for the Lakers is the poor play of Russell Westbrook. He struggled once again in the loss to the Celtics, scoring just 12 points on 5 of 13 shooting from the field. Westbrook only had four rebounds and six assists in this game, a far cry from the numbers he usually posted in the past seasons.