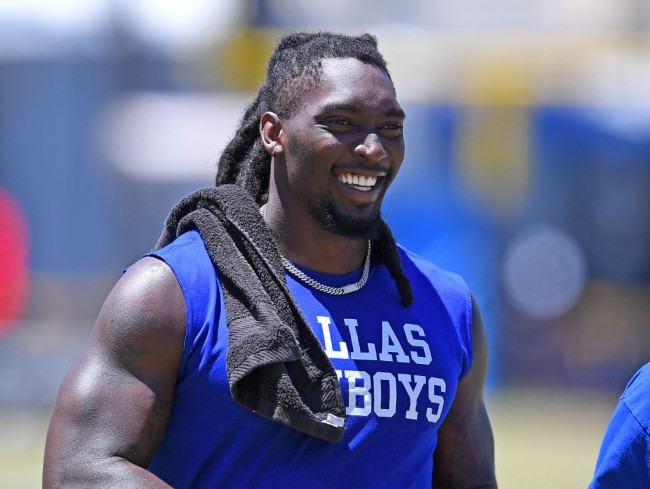 OXNARD, CA – Defensive end DeMarcus Lawrence (#90) of the Dallas Cowboys is interviewed by the media during training camp at the River Ridge Complex on August 3, 2021 in Oxnard, California. (Photo : Jayne Kamin-Oncea/Getty Images)

The injury bug has struck the Dallas Cowboys again, with DeMarcus Lawrence the latest to fall victim. The star defensive end suffered a broken foot during Wednesday’s practice and is expected to miss six to eight weeks because of the injury.

Coach Mike McCarthy confirmed the unfortunate development in a press conference, saying Lawrence already had surgery on Thursday to repair the fracture on his foot. McCarthy noted that Lawrence picked up the injury on a one-on-one pass rush move while coming around the corner.

Lawrence a huge loss for the Cowboys’ defense

McCarthy rued the loss of Lawrence, saying that he’s a prime-time player for the Cowboys who’s coming off an excellent start in Tampa. McCarthy later added that he hates to see these injuries to his players, but it gives opportunities to the other guys on the roster.

That being said, replacing Lawrence in the weeks ahead will be a tall order for the Cowboys. Lawrence is a two-time Pro Bowl pick and has recorded 45.5 sacks in his NFL career. Even though the Cowboys didn’t record a sack in the season opener against the Tampa Bay Buccaneers, Lawrence had a solid outing in Week 1, recording six tackles, two quarterback pressures, and forcing a fumble against the reigning Super Bowl champions.

To make matters worse for McCarthy and Dallas’ beleaguered defense, the Cowboys’ second best pass-rusher is also a major doubt for Sunday’s showdown with the Los Angeles Chargers. Randy Gregory tested positive for COVID-19 on Monday, and McCarthy didn’t sound hopeful in Thursday’s press conference that he will pass the protocols in time for the Chargers game.

Basham and Armstrong set to start in Week 2

With Lawrence sidelined and Gregory still battling the coronavirus, the Cowboys might turn to Tarell Basham and Dorance Armstrong as their defensive end starters in Week 2. Basham and Armstrong have combined for just 10 sacks in their careers, only 3.5 sacks more than Lawrence’s output for Dallas a year ago. Basham has amassed a total of 7.5 sacks in 59 games played.

It has been a rough stretch for the Cowboys since they suffered a narrow 31-29 loss to the Bucs in the 2021 season opener. Apart from Lawrence and Gregory, the Cowboys have lost two other starters after that Week 1 defeat. Wide receiver Michael Gallup was placed on Dallas’ injured reserve because of a calf strain while the NFL suspended right tackle La’el Collins for five games after violating the league’s substance abuse policy.

However, it’s not all doom and gloom for the Cowboys, as they will have Pro Bowler Zack Martin back in Week 2. According to owner Jerry Jones, Martin will return to his usual guard slot with Terence Steele set to step in at right tackle.