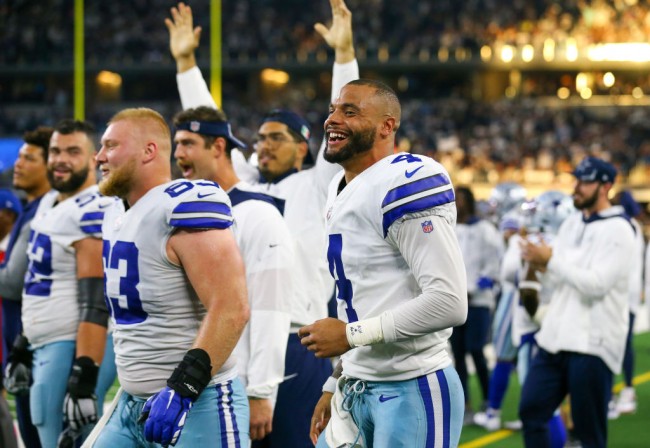 Two of the league’s most popular teams will be facing each other on Sunday afternoon in Week 6 as Dak Prescott and the rest of the red-hot Dallas Cowboys visit the New England Patriots at the Gillette Stadium. Who has the advantage in this Cowboys vs Patriots showdown? Here’s an in-depth breakdown of this blockbuster clash.

Dallas extended its winning streak to four games with a comprehensive 44-20 victory over the New York Giants in Week 5. It was a critical victory for the Cowboys, who now hold a two-game lead atop the NFC East standings.

Dak Prescott led the way for the Cowboys in this one-sided win, completing 22 of 32 passes for 302 yards with three touchdowns and one interception. Prescott’s emotional victory came a day before the one-year anniversary of his gruesome ankle injury in the same venue.

Prescott got some help on the ground from Ezekiel Elliott, who rushed for 110 yards and a touchdown on 21 carries. Elliott finished with at least 100 rushing yards for the second game running, the first time that had happened since 2019 when he racked up three straight games with that stat line.

The Cowboys wreaked havoc against the Giants, generating 515 yards of total offense. The Cowboys will look to keep it going against a New England defense that surrendered 360 total yards against the Texans in Week 5.

New England finally snapped its two-game losing skid with a thrilling 25-22 come-from-behind win over Houston in Week 5. The Patriots delivered a strong finishing kick, scoring 16 unanswered points to turn a 22-9 deficit into a three-point victory in the end.

Mac Jones‘ poise stood out in the Pats’ much-needed victory as he secured his first career game-winning drive in the NFL. The rookie quarterback made sure the Patriots would leave Houston with the win, chewing up seven minutes of game time in the fourth quarter with his epic 15-play drive, culminating in Nick Folk’s 21-yard field goal attempt just 15 seconds left that gave New England a three-point lead.

Mac Jones to Hunter Henry for a touchdown 🔥🔥 pic.twitter.com/vO8ENuYTx8

Jones had been one of the few bright spots for the Patriots this season, completing more than 70 percent of his passes in four of his five starts. He finished 23-of-30 against the Texans for 231 yards with one touchdown and one interception. Hunter Henry benefited from Jones’ outstanding play on Sunday, catching a team-high six passes for 75 yards.

Jones will be tested, though, in Week 6 against a Dallas defense that arguably possesses the league’s best cornerback in Trevon Diggs. He grabbed his sixth interception of the season in the win against the Giants.

10 Most Popular Google AI Projects that Everyone Should Know

10 Data Analytics Tools You Can Consider for Application