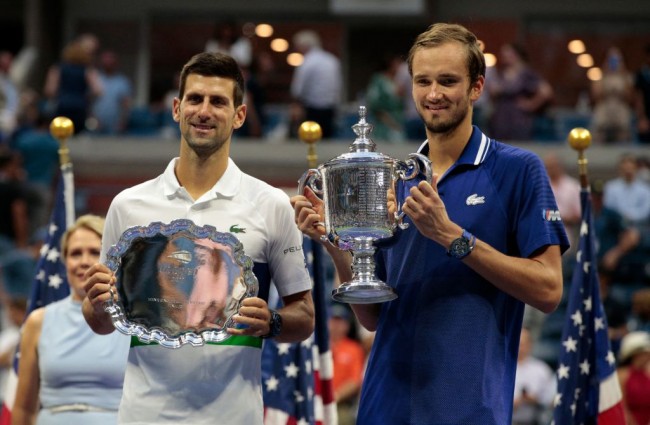 There will be no Calendar Slam for Novak Djokovic after Daniil Medvedev authored the mother of all upsets in Sunday’s 2021 US Open final. The Russian delivered a tennis masterclass to grab his maiden Grand Slam title, beating Djokovic in straight sets, 6-4, 6-4, 6-4, in front of a stunned crowd at Arthur Ashe Stadium.

Djokovic entered this contest as the prohibitive favorite given his outstanding record at Grand Slam tournaments this year. This year, he had won all 27 of his previous Grand Slam matches, capturing major titles at the Australian Open, French Open, and Wimbledon to give himself a shot at tennis immortality.

However, Medvedev started the match with guns blazing, winning 20 of his first 23 service points to grab the early edge over Djokovic. Despite losing the first set, Djokovic was expected to make his patented comeback given that he had won his previous four matches here in New York after dropping the opening set.

The comeback didn’t happen as Medvedev continued to step on the gas and drive home his advantage. He finished the match with 38 winners, 11 more than Djokovic, who uncharacteristically committed many unforced errors in the biggest game of his life.

There were some late-match hiccups for Medvedev, who committed multiple double faults on championship point. He eventually sealed the deal, though, doing the famous “dead fish celebration” in the soccer video game FIFA once his upset of Djokovic was done and dusted.

It was a disappointing defeat for Djokovic, who was gunning for two historical records with a win over Medvedev. He failed to record the Calendar Slam that the great Rod Laver last accomplished in 1969; Djokovic was also unsuccessful in breaking a three-way tie with Rafael Nadal and Roger Federer for most Grand Slam titles in men’s tennis history (20 majors apiece).

The three tennis icons may still be tied in terms of Grand Slam wins, but there was no doubt in Medvedev’s mind who is the greatest player ever. Medvedev offered Djokovic praise in his championship speech for what he has accomplished throughout his illustrious career, saying, “I never said this to anybody, but I’ll say it right now. For me, you are the greatest tennis player in history.”

An emotional Djokovic was gracious as ever in his post-match interview, saying that if there is anyone who deserves a Grand Slam title right now, it is Medvedev. He added that he is sure there will be many more titles to come for the Russian.

Djokovic then paid tribute to the New York crowd, who showered him with love and support like never before throughout the tournament. The world no. 1 said that even though he didn’t win the match, he still is the happiest man alive because the fans made him feel very special on the court. He later added, “You guys touched my soul. I’ve never felt like this in New York. Thank you for your support. I love you.”