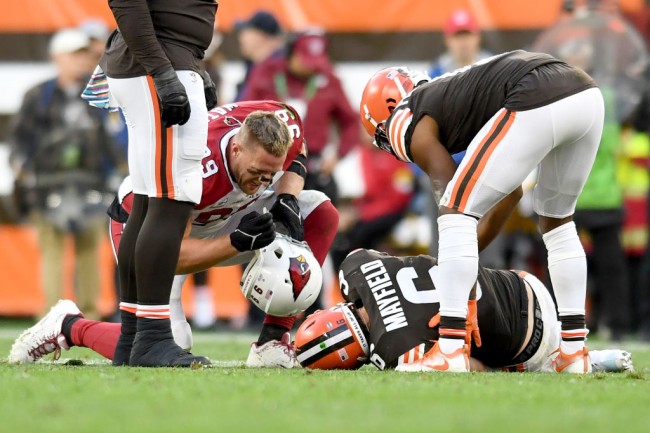 CLEVELAND, OHIO – J.J. Watt (#99) of the Arizona Cardinals checks on Baker Mayfield (#6) of the Cleveland Browns after an injury on a stripped sack during the third quarter at the FirstEnergy Stadium on October 17, 2021 in Cleveland, Ohio. (Photo : Nick Cammett/Getty Images)

The Cleveland Browns and the Denver Broncos look to end their respective losing skids when they square off in this week’s edition of Thursday Night Football. Here’s a breakdown of this Broncos vs Browns primetime game to see who has the edge in this pivotal AFC clash.

Things are going from bad to worse for the Denver Broncos as they crashed to their third consecutive defeat with a 34-24 loss to the Las Vegas Raiders in Week 6. After starting the season with three straight wins, the Broncos now head into Week 7 with an even 3-3 record. They are now one game behind leaders Las Vegas and LA Chargers in the AFC West standings.

They will look to get their season back on track when they face the injury-plagued Cleveland Browns on Thursday Night Football. They must start strong in this primetime encounter for the Broncos to end their losing skid against the Browns.

The Broncos had trailed in the opening quarter in four of their first six games this season. They also trailed by double digits at half-time during their losses to Baltimore, Pittsburgh, and Las Vegas the past three weeks.

The injury bug had struck the Broncos badly this season, with Alexander Johnson the latest to fall victim in Week 6. He tore his right pectoral muscle during the loss to the Raiders and will now miss the remainder of the season. Johnson is a major loss for the Broncos as he is the team’s second leading tackler, recording 32 tackles for the season before his injury.

The Cleveland Browns are in a whole lot of trouble heading into their showdown with the Broncos. They are losing ground fast in the AFC North, trailing division leaders Baltimore by two games following their 37-14 loss to Arizona in Week 6. They also have to navigate the next few weeks without two of their key running backs after Nick Chubb and Kareem Hunt picked up injuries in their last two games.

Hunt has been placed on the injured reserve after suffering a calf injury in the loss to Arizona and is expected to be out for at least 4-6 weeks. Chubb also had a calf problem that ruled him out for the Week 6 game against the Cards. He picked up the injury during the closing stages of their loss to the Chargers and is a major doubt for the game against the Broncos.

JJ Watt makes a monumental strip-sack on Baker Mayfield, severely injuring him in the process of what was a clean football play. It speaks to his character that JJ is the first to check on Baker and instantly waves the medical team over. A Wisconsin heart pic.twitter.com/ZmQ0g373dN

To make matters worse for the Browns, Baker Mayfield’s shoulder issue flared up once again in the loss to Arizona. He dislocated his left shoulder again in Week 6 after being sacked by T.J. Watt on a 2nd-and-13 situation during the third quarter.

Mayfield was seen wearing a sling on his left arm after the game, a worrying development given that the Browns have a short turnaround for their Thursday Night Football game.

Cleveland wins and covers the spread.

Everything You Need Know about Accurate Data

A Pioneer of Digital Trust and Safety