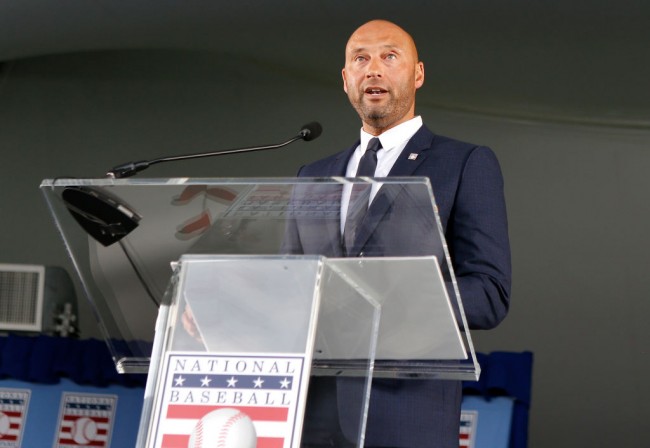 Derek Jeter and Larry Walker are officially baseball Hall of Famers. The two baseball legends, alongside Marvin Miller and Ted Simmons, were finally inducted into the Hall of Fame a year after the COVID-19 pandemic canceled the foursome’s original induction ceremony.

Jeter reaching Cooperstown was never in doubt after playing 20 stellar seasons with the New York Yankees. The Bronx Bomber finished his MLB career with 3,465 hits and 1,923 runs scored, recording 4,921 total bases in the process.

Jeter a vital cog for the Yankees during the postseason

Jeter rose to prominence, however, with his heroics in the postseason, leading the Yankees to five championships, with his last title coming in 2009. He played in a record 158 postseason games for the Yanks, almost the equivalent of one entire MLB season. Jeter made a living in the playoffs, hitting .308 with 111 runs scored and racking up 200 hits, 32 doubles, 20 home runs, 61 RBI, and 66 walks.

The Captain has as storied a career as any 🍿 pic.twitter.com/6sR05fqz2a

What made Jeter such a great player for the Yankees was his longevity and consistency. Jeter recorded at least 200 hits in eight different seasons and played 2,674 games as a shortstop for the Yanks. Jeter even finished third in the American League Most Valuable Player voting at the age of 35, hitting .334 in 2009 en route to winning another World Series ring.

It wasn’t surprising that Jeter made it to the Hall of Fame on the first ballot, but he failed to secure a unanimous selection. He only received 99.7 percent of the vote as one writer left Jeter off his ballot, denying the Yankees great the accolade of being the second player to receive 100 percent of the vote.

Jeter hasn’t forgotten the writer who snubbed him in voting

At least 397 ballots were submitted when Jeter was elected to the Hall, with 315 writers going public with their votes. The identity of that anonymous voter is still unknown, but Jeter sure hasn’t forgotten that writer for his or her snub. In his Hall of Fame speech, Jeter said, “Thank you to the baseball writers. All but one of you.”

The writers weren’t the only ones Jeter thanked during his speech. Jeter also paid tribute to his coaches and teammates with the Yankees, his family, and the countless others who helped him during his baseball journey.

The stars were out in full force to support the Yankees captain with his Hall of Fame induction. Among the former Yankees in attendance were Reggie Jackson, Willie Randolph, Tino Martinez, Jorge Posada, Mariano Rivera, CC Sabathia, and Bernie Williams.

NBA stars Michael Jordan and Patrick Ewing also made the trek to Cooperstown to support Jeter on Hall of Fame day.

How Big Data is Helping Businesses to Flourish