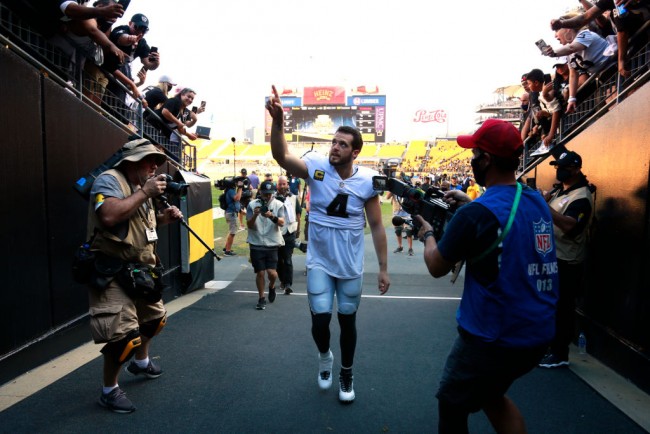 PITTSBURGH, PENNSYLVANIA – Quarterback Derek Carr of the Las Vegas Raiders points to fans while running off the field after the game against the Pittsburgh Steelers at the Heinz Field on September 19, 2021 in Pittsburgh, Pennsylvania. (Photo : Justin K. Aller/Getty Images)

After pulling off a monster road win over the Pittsburgh Steelers, the Las Vegas Raiders remained unbeaten to start the season. They will look to make it three wins in a row when they face the injury-plagued Miami Dolphins this coming Sunday. Who will prevail in this Dolphins vs Raiders showdown? Check our preview to see who has the edge.

To say that the Dolphins had a horrible Week 2 would be a severe understatement. Not only did they suffer an embarrassing 35-0 loss to the Buffalo Bills on Sunday, but their starting quarterback Tua Tagovailoa also went out injured. He took a huge hit from Bills defensive end AJ Epenesa on just their second drive of the game.

The good news for the Dolphins is that Tagovailoa didn’t fracture his ribs in that collision and is considered day-to-day after that injury. On Monday, head coach Brian Flores admitted that Tagovailoa is still in a “good deal of pain,” which is not a good sign for Miami with its Week 3 clash against Las Vegas just days away.

Tua Tagovailoa is hurt. Here is a video of the injury (via @BradleyGelber)

Flores did not say whether Tua would play this coming Sunday, but the Dolphins coach does not doubt his quarterback’s toughness. Flores alluded to Tagovailoa’s previous injury in Alabama, where he played with a hip problem, saying, “He’s a tough kid, for sure. If Tua can go, he’s gonna go.”

If Tua can’t go in Week 3, the Dolphins will hand the ball again to backup quarterback Jacoby Brissett. He completed 24 of 40 passes for 169 yards and an interception in the loss to the Bills. Brissett faced the Raiders once before in 2019, throwing for 265 yards and three touchdowns in a loss.

There is just no stopping the Las Vegas Raiders right now. The Raiders recorded a major upset in Week 2, defeating the Pittsburgh Steelers on the road to start the season 2-0. Derek Carr starred for the Raiders in their 26-17 win, completing 28 of 37 passes for 382 yards and two touchdowns.

Derek Carr with a 60-yarder to Henry Ruggspic.twitter.com/btdK6Jra8q

Arguably, Carr is the best quarterback in the NFL at the moment. This season, he leads the league in passing yards with 817, which is 128 more than Arizona’s Kyler Murray and 137 more than Kansas City’s Patrick Mahomes. He did it the hard way as well, completing 66 percent of his passes with four touchdowns and just one pick against two of the league’s best defensive units in Baltimore and Pittsburgh.

Carr is listed as questionable for the Week 3 game against Miami after suffering an ankle injury in the win against the Steelers. The good news for Vegas fans is that Carr returned to that Pittsburgh game after picking up the ankle problem, so he is more than likely good to go for Week 3.

If for some reason, Carr’s injury worsens, and he can’t play against the Dolphins, the Raiders will turn to Nathan Peterman as their starting quarterback with backup Marcus Mariota currently on injured reserve, a frightening thought for Raiders fans.

The Raiders continue their winning ways with a 27-13 victory over the Dolphins.