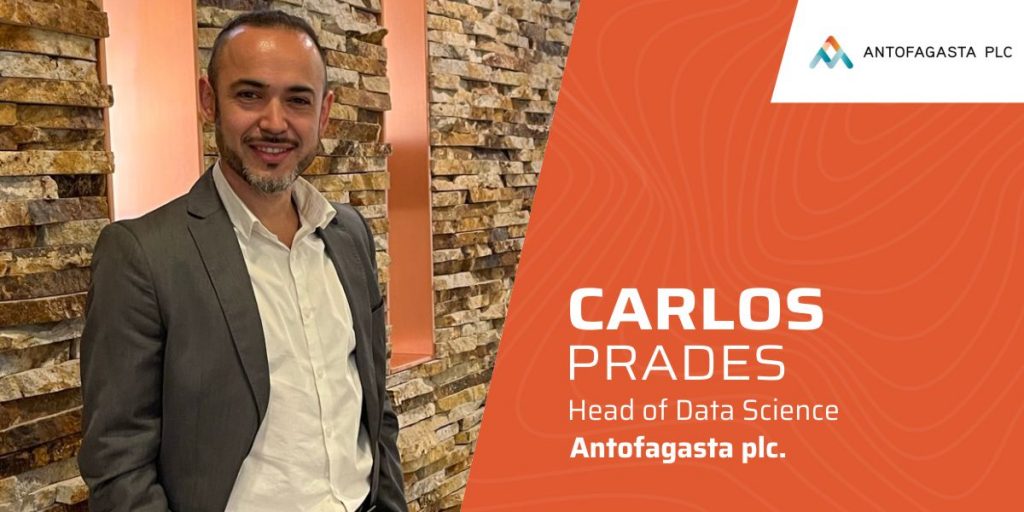 Antofagasta plc is a multinational company that is one of the most prominent conglomerates of Chile with equity participation in Antofagasta Minerals, one of the major copper producers of the world, operating four copper mines namely: Los Pelambres, Centinela, Antucoya, and Zaldivar.  Antofagasta plc also has equity participation in the railroad from Antofagasta to Bolivia, Twin Metals in Minnesota, and other exploration joint ventures in different locations of the world. The company is listed on the London Stock Exchange and is a constituent of the FTSE 100 Index.

The Journey Towards Building a Team

Carlos Prades is the Head of data science at Antofagasta Minerals. He pursued Geology at the University of Chile Engineering School, which gave him a strong mathematical background. After his studies, Carlos worked for a few years as a mine geologist and as an exploration geologist in Talcuna Mine and Escondida Mine (BHP Billiton). In 2012 Carlos began working at Antofagasta Minerals as a resource geologist, applying his geostatistical abilities to make 3D models and resource estimation of the company’s deposits.

In 2015, he went to Canada to achieve a Master’s degree in one of the best mining universities in the world, the University of Alberta. While applying machine learning methods to mining problems during his research, he started competing in Kaggle, the most important international platform for international challenges, where Carlos achieved three medals in four competitions one each in gold, silver, and bronze.

He came back to Antofagasta Minerals at the end of 2017 and began to apply data science to different and diverse mining problems, leading the data science path in the mining industry and demonstrating the power of machine learning techniques to make better decisions based on data.  Carlos worked on his own and generated value-supporting decisions in some of the company’s mines for almost two years.

In January 2020 he built a data science team that developed several projects staging from exploration to the different steps of a mining operation. Carlos has led the team, using creativity to add value in the mining industry using data science.

A Leader with Passion

Carlos says that studying geology, working as a geologist, and pursuing MSc in mining engineering gave him a strong mining and mathematical background. During his master’s in science research, he learned about machine learning. Carlos has explored a lot about data science in Kaggle, which allowed him to practice with real problems and also learn from some of the best data scientists in the world.

He has been able to demonstrate the power of applying data science to mining problems by developing successful projects in the mining industry, which have added a lot of value to the company which is formally estimated as several million dollars. Carlos also says that the company is always developing projects in mining in which data science has not been applied before. So, he helps Antofagasta Minerals in finding ways to apply data science techniques in innovative ways to leverage mining.

An Opportunity to Demonstrate the Power of Data Science

When Carlos came back from Canada to Antofagasta Minerals after pursuing MSc in Mining Engineering, he took his previous position in the company as a resource geologist. But he wanted to apply machine learning as he knows his power when dealing with complex and multivariate systems. For this Carlos had to persuade his current boss (Andronico Luksic, Antogasta Minerals Development Vicepresident) to give him a chance to demonstrate the power of data science. Andronico trusted him and allowed him to apply his knowledge, which led to successful projects. The first important and successful project that Carlos developed was in the Antucoya mine, in which he used data science to make decisions that led to increased copper recovery by around 5%. After that Carlos went on to build the first data science team in Antofagasta Minerals which he is still leading.

Creativity and Motivation as the Two Vital Attributes

According to Carlos, the vital attributes that every data science leader needs to possess to be successful are creativity,  motivation, and the ability to learn by themselves. He says that achieving practical and economic results has a lot to do with research.  Carlos says that working when inspiration comes can motivate a good data scientist to heights. For this reason, he thinks that a data science leader must set goals but at the same time has to give freedom to the team to work and get more inspired.

“I don’t care about how many hours my team members work nor when they work. I just care about them achieving the goals we have set. I think a good data science leader has to trust and give a lot of freedom to the team members so they can work with lots of motivation and produce moments of great inspiration”, says Carlos.

While talking about disruptive technologies, Carlos says that data science has demonstrated its value in different industries. He believes that leaders of the future have to embrace these powerful tools, instead of making decisions based on intuition or beliefs. Carlos asserts that they have to listen to what the data says with an open mindset.

Carlos predicts the future decisions of the company will be made with supported data. The decisions that are either made by the high executives or automated will be made taking into account the data and algorithms in the next coming years to come, he adds.

A Piece of Wisdom to Emerging Tech Leaders

Carlos advises all the tech leaders to give opportunities to people with demonstrated capability to learn by themselves, to approach and solve problems even when they have no previous knowledge about it. Carlos asks young future tech leaders to build up confidence with intelligence that sharpens their ability to figure any problem out for better growth of the organization.