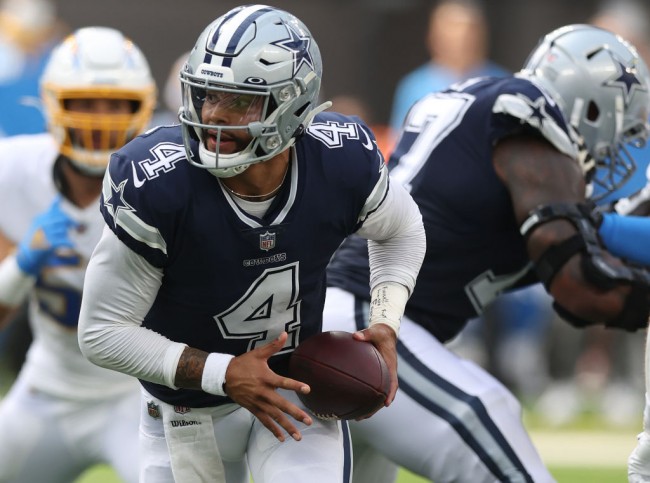 The Dallas Cowboys have won their last three meetings with the Philadelphia Eagles at the AT&T Stadium. They will look to extend that winning streak to four games when they host the Eagles in Week 3. Who will emerge victorious in the Eagles vs. Cowboys clash? Check our preview to see who has the edge in this Monday Night Football matchup.

Injury problems are mounting for the Philadelphia Eagles ahead of their Week 3 clash with the Dallas Cowboys. They lost two Pro Bowl veterans in the Week 2 loss to the San Francisco 49ers, with defensive end Brandon Graham and starting right guard Brandon Brooks injured.

Head coach Nick Sirianni gave updates regarding their injuries on Monday, and the news isn’t good for Graham. He has been ruled out for the season after he ruptured his Achilles tendon on Sunday. He was arguably Philadelphia’s best defensive player last season, and his energy and positivity off the field will be sorely missed.

Sirianni called Graham the heart and soul of the Eagles franchise, and it will be tough replacing him on the roster. Sirianni and defensive coordinator Jonathan Gannon still have some depth at the defensive end position. It will be interesting to see how they will utilize that moving forward in Graham’s absence.

Among the possible replacements for Graham are Derek Barnett and Josh Sweat, who mainly played on the right side of the line. Another interesting option is rookie DE/DT Milton Williams.

There was better news for Sirianni regarding Brooks, who suffered a pectoral injury against the 49ers. Even though he will likely spend some time on the injured reserve, Brooks is expected to return soon as he is only dealing with a pectoral strain instead of a complete tear. With Brooks out, Landon Dickerson is expected to start in his absence.

Another concerning development for the Eagles is that tight end Zach Ertz has tested positive for COVID-19. He has been placed on the reserve/COVID-19 list and is doubtful for Monday’s game against the Cowboys.

The Cowboys will head home to Dallas with an even 1-1 record after beating the Los Angeles Chargers, 20-17, on Sunday. Greg Zuerlein kicked a game-winning 56-yard field goal as time expired to hand the Cowboys their first win of the new campaign.

An electric ending thanks to Greg Zuerlein!#DALvsLAC | 🎥 Watch now on CBS & @NFLNetwork pic.twitter.com/CcGKTKoSUK

Many expressed concern about the Cowboys’ defense before this contest, with a spate of injuries hitting their defensive unit days before the Week 2 clash. They faced the Chargers without starting safety Donovan Wilson and starting defensive ends DeMarcus Lawrence and Randy Gregory.

Those concerns proved to be baseless as the Cowboys held the high-powered Chargers offense to just 17 points. That enabled Dallas to break its streak of 34 straight games of only winning when scoring at least 30 points. Even though the Cowboys allowed 408 yards in Week 2, the Chargers were able to find the end zone just once on their four red zone trips.

That was more than enough for the Cowboys’ tremendous offense on the ground against the Chargers. They racked up 198 yards rushing in Los Angeles, with Tony Pollard and Ezekiel Elliott combining for 180 of those. They will have their work cut out against an Eagles defensive line that has allowed just one rushing touchdown this season.

Difference Between Bitcoin and Bitcoin Cash for Beginners