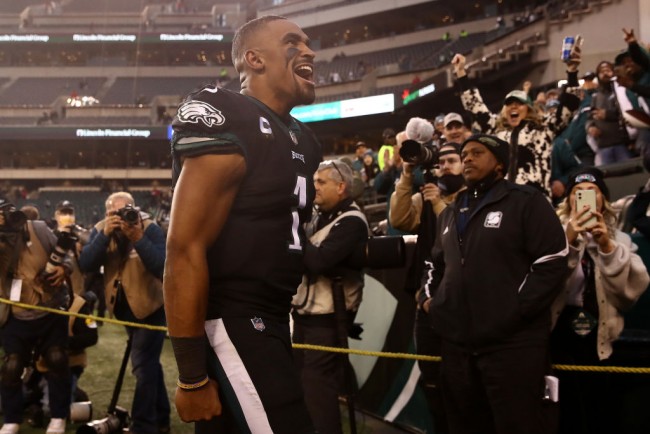 PHILADELPHIA, PENNSYLVANIA – Jalen Hurts #1 of the Philadelphia Eagles celebrates as he walks off the field after defeating the New Orleans Saints 40-29 at Lincoln Financial Field on November 21, 2021 in Philadelphia, Pennsylvania. (Photo : Tim Nwachukwu/Getty Images)

A key divisional matchup will be heading our way in Week 12 as the New York Giants host the Philadelphia Eagles in a pivotal NFC East encounter. Can the Eagles stretch their unbeaten run to three games, or will the Giants deliver a win in front of their home fans? Here’s a breakdown of the Eagles vs Giants clash.

The Philadelphia Eagles extended their winning streak to two games with a convincing 40-29 victory over the New Orleans Saints in Week 11. It was a critical win for the Eagles, who moved to within 2.5 games of the Dallas Cowboys in the NFC East standings. They took full advantage of Dallas’ loss against the Kansas City Chiefs.

Jalen Hurts starred for the Eagles in the Week 11 win, running for 69 yards and three touchdowns on 18 carries. The Eagles as a unit ran for 242 yards against the Saints, which was impressive given that New Orleans entered this contest with the league’s top-ranked rushing defense.

The Eagles will be licking their chops at the prospect of facing a Giants team that is 22nd in the NFL in rushing defense, allowing 119.7 yards per game this season.

The New York Giants will head into Week 12 with a new offensive coordinator after Jason Garrett was fired following the team’s lackluster showing against the Tampa Bay Buccaneers on Monday Night Football. In the second half of that primetime encounter, the Giants’ offense failed to score, losing 30-10 to the reigning Super Bowl champions.

The Giants recorded just 42 offensive touchdowns in the 26 games they played under Garrett’s watch, the fewest of any NFL team since the start of last season. That is the main reason why the Giants are languishing in the bottom of the NFC East standings with a measly 3-7 record.

The pressure now is on head coach Joe Judge to finish strong this 2021 season, or he will be the next one getting the ax. The Giants are just 9-17 since Judge took over as head coach in 2020. He will need to find ways to galvanize a Giants offense that registered just 215 total yards in the loss to the Bucs.

What made that showing so infuriating for Giants fans is that New York’s main offensive weapons were back for that contest. Running back Saquon Barkley, left tackle Andrew Thomas, and wide receivers Kenny Golladay and Kadarius Toney were at the Giants’ disposal in Week 11 but they still were not able to trouble a Bucs’ defense that had struggled in their previous two games.

Philadelphia wins and covers the spread.

Will Green Cryptocurrencies Make a Strong Debut in 2022?