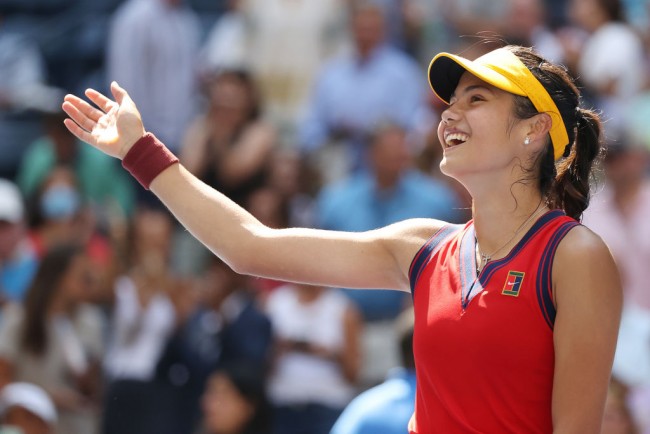 NEW YORK, NEW YORK – Emma Raducanu of the United Kingdom waves to the crowd after defeating Belinda Bencic of Switzerland during their Women’s Singles quarterfinals match on Day 10 of the 2021 US Open at the USTA Billie Jean King National Tennis Center on September 08, 2021 in the Flushing neighborhood of the Queens borough of New York City. (Photo : Al Bello/Getty Images)

Emma Raducanu continued to turn Flushing Meadows into her playground as the 18-year-old British star reached her maiden Grand Slam semifinal on Wednesday with an impressive straight-set win over reigning Olympic champion Belinda Bencic at the 2021 US Open.

Raducanu showed poise beyond her years in her quarterfinal clash against Bencic, needing just one hour and 21 minutes to record a 6-3, 6-4 win in front of a packed crowd at the Arthur Ashe Stadium. With the victory, Raducanu became the first qualifier in the professional era to reach the semifinal stage of the US Open.

Raducanu in sizzling form at US Open

It has been an incredible run by Raducanu, who has steamrolled past her rivals over the previous 1 ½ weeks. Raducanu has played in eight US Open matches thus far, three in the qualifying rounds and five in the main draw, and she has not dropped a set in any of those.

That run seemed in danger in the early going against Bencic as the Swiss star stormed to a quick 3-1 lead in the first set. Raducanu fought back, winning five consecutive games to hand Bencic her first dropped set of the tournament.

Raducanu continued her fine play in the second set as she managed to hold her composure down the stretch, winning each of her last two service games despite falling behind love-30 to grab the shock win over Bencic. She became only the third woman ranked outside the top 100 to advance to the semis of the US Open.

Raducanu is the second teenager to reach the final four of this year’s US Open, joining Canada’s Leylah Fernandez, who barged into the semis the day before. Fernandez defeated Elina Svitolina to become the youngest semifinalist at the US Open since Maria Sharapova in 2005. Both teenagers are now just one win away from forging a dream final here in New York.

In the men’s draw, Alexander Zverev moved to within a victory of a return trip to the US Open final after beating Lloyd Harris in the quarterfinals. Zverev needed two hours and eight minutes to outlast Harris in straight sets, 7-6 (6), 6-3, 6-4.

Zverev’s win was not easy by any means as he had to save a set point on the Harris serve in the first-set tiebreak. The German cruised to victory after that, though, breaking Harris’ opening service games in the second and third sets to take the fight away from the South African.

Zverev has been in terrific form of late, winning each of his last 16 matches, including title victories at the Tokyo Olympics and Cincinnati. He will next face Wednesday night’s quarterfinal winner between 20-time Grand Slam champion Novak Djokovic and World No. 8 Matteo Berrettini.

Chelsea were ready to pay £85m for Brazilian star