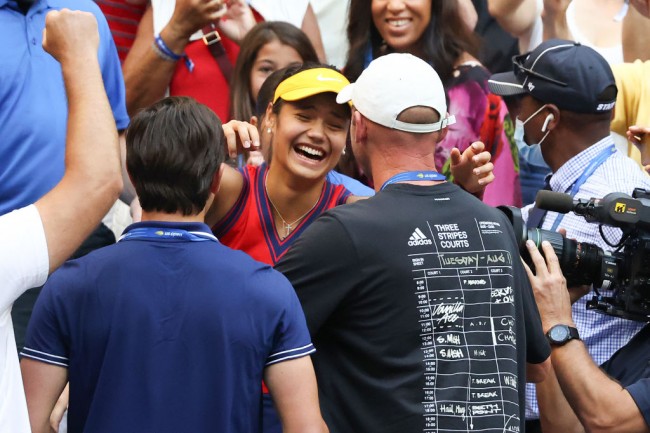 NEW YORK, NEW YORK – Emma Raducanu of Great Britain celebrates with her coach Andrew Richardson after defeating Leylah Annie Fernandez of Canada to become the first qualifier to win the 2021 US Open title at the USTA Billie Jean King National Tennis Center on September 11, 2021 in the Flushing neighborhood of the Queens borough of New York City. (Photo : Al Bello/Getty Images)

Emma Raducanu has shocked the world again. Just weeks after capturing the 2021 US Open title in stunning fashion in New York, Raducanu has decided to sack the coach who guided her to that maiden Grand Slam win.

Raducanu announced on Friday that she had parted ways with Andrew Richardson, the coach she hired for the summer tournaments across the pond in the United States. Richardson was chosen to join Raducanu on her US trip because of his familiarity with the tennis star, having previously coached the 18-year-old at Bromley Tennis Centre.

Raducanu wins US Open with the help of Richardson

That move paid immediate dividends as Raducanu went on to record one of the greatest wins in tennis history at the US Open. She entered the tournament ranked 150th in the world and had to go through three matches in the qualifying round to advance to the main draw.

Raducanu passed that test with flying colors and even exceeded her own expectations, winning ten straight matches to become the first-ever qualifier, male or female, to win a major title. She also did it in style, not dropping a single set during that historic run. However, that wasn’t enough for Richardson to hold on to the coveted coaching position, with Raducanu deciding she needed a coach with experience in the WTA Tour.

Speaking after a “Homecoming Party” organized by the Lawn Tennis Association at the National Tennis Centre in London, Raducanu said, “I feel like at this stage in my career, and playing the top players in the world, I realized I really need someone right now that has had that WTA Tour experience at the high levels.”

Raducanu added being new to this level of competition; she needs someone who has already been through that to guide her in the next stage of her career. Even though Richardson’s firing came as a complete shock to many, the Raducanu camp is notorious for changing her coaches regularly in the past.

Related Article: Emma Raducanu Reunites With Parents in the UK After Sensational 2021 US Open Win in New York

Darren Cahill rumored to be Raducanu’s next coach

She did the same thing weeks after reaching the fourth round of this year’s Wimbledon, with Raducanu dropping Nigel Sears, Andy Murray’s father-in-law, as her coach. That opening landed Richardson the job but now isn’t his anymore.

Raducanu admitted that it was tough axing Richardson given the success they enjoyed together at Flushing Meadows, but she needed to make that decision to better her career. Raducanu said she doesn’t expect to decide on her new coach until the end of the season and that she didn’t have a replacement in mind at the moment.

One candidate, however, has emerged as Raducanu’s possible next coach with the experienced Darren Cahill, now a free agent after his split with two-time major winner Simona Halep. Cahill checks all the boxes that Raducanu wants in her next coach, and it will be interesting to see whether the two will indeed team up together soon.

West Ham and Crystal Palace could move for Arsenal star