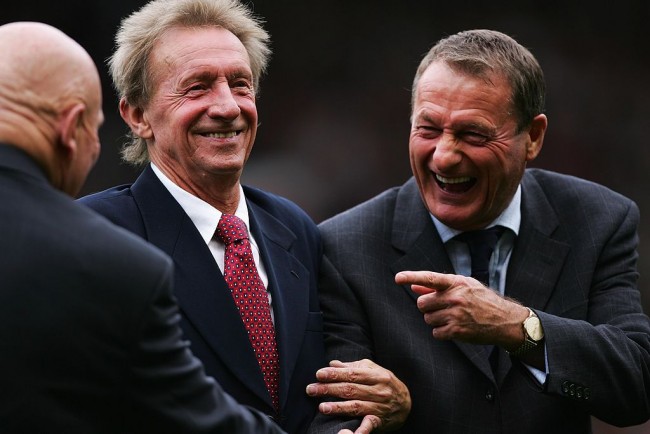 The entire football community is in mourning after the passing of legendary English striker Roger Hunt. Hunt’s former club, Liverpool FC, announced the unfortunate news on Tuesday, with tributes quickly pouring in for the 83-year-old forward, who holds the club record for most goals scored by a Red in the league.

The Reds released a statement, saying, “Liverpool FC is mourning the passing of legendary former player Roger Hunt. Hunt, the club’s second-highest goalscorer of all time with 285 goals in 492 appearances, passed away peacefully at home following a long illness on Monday evening. He was 83.”

Tributes pour in for Hunt

Liverpool FC manager Jurgen Klopp was saddened by the news of Hunt’s passing, saying, “Roger Hunt comes second to no-one in his importance in the history of Liverpool FC, that much is clear.” Klopp added that Hunt made Liverpool the club it is today, being the goal-scoring catalyst of Bill Shankly’s famous winning teams in the 1960s.

Hunt, who was born in Golborn, Cheshire, on July 20, 1938, began his Liverpool career in 1958 after he was signed by the Reds from amateur team Stockton Heath. He went on to play 11 ½ successful years at Anfield, leading Liverpool to incredible heights during his stay there.

Hunt helped Liverpool escape the Second Division in 1962, scoring 41 goals in as many matches to secure the Reds’ promotion to the First Division. He continued his goal-scoring brilliance in the English top flight, eventually scoring a club record of 244 goals in the league.

Rush paid tribute to Hunt, saying that it was very sad to hear of his passing. Rush added that Hunt was someone he would always look up to, given that the Liverpool legend was “a fantastic goal scorer and a true gentleman on and off the pitch.”

Hunt also played a major part in England’s World Cup win in 1966. He played in every game of that competition, scoring three times to help the Three Lions out of their group. He scored twice in the group game against France and the match against Mexico before playing in the famous 4-2 victory over West Germany in the World Cup final.

Hunt won 34 caps for England, scoring 18 goals during his stint with the national team. He made his debut for England in 1962, when he was still plying his trade in the Second Division with Liverpool.