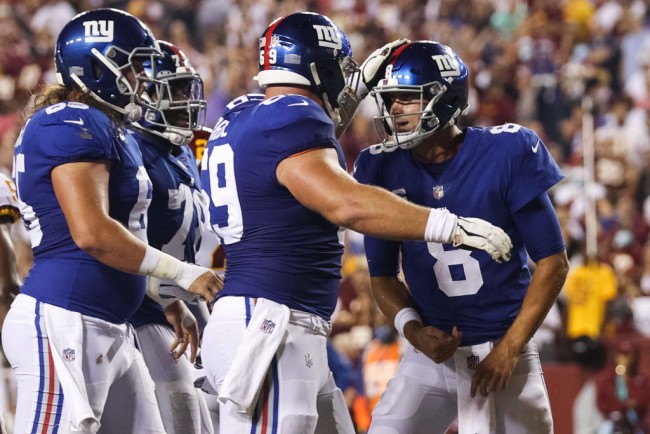 LANDOVER, MARYLAND – Daniel Jones (#8) of the New York Giants celebrates with Billy Price (#69) after rushing for a touchdown during the first quarter against the Washington Football Team at the FedExField on September 16, 2021 in Landover, Maryland. (Photo : Rob Carr/Getty Images)

A losing streak will end this coming Sunday as the Atlanta Falcons and the New York Giants square off in a battle of 0-2 teams. Read our preview of the Falcons vs Giants matchup to see who has the advantage in this NFC clash.

Atlanta’s losing woes show no sign of abating as the Falcons suffered a humiliating 48-25 defeat at the hands of the Tampa Bay Buccaneers on Sunday. The Falcons had no answer for seven-time Super Bowl champion Tom Brady, who improved to 9-0 in his career against Atlanta after throwing for 276 yards and five touchdowns.

The Falcons’ start to the 2021 NFL season has been horrendous, to say the least, allowing 80 points over the first two weeks, the worst total in the franchise’s history. The Falcons also have the worst point differential in NFL history through the first two games, with Atlanta carrying a -49 mark after heavy defeats to Philadelphia and Tampa Bay.

The pressure now is on new coach Arthur Smith to devise a winning game plan against the New York Giants in Week 3. It is critical for the Falcons that quarterback Matt Ryan step up his play in the Big Apple. He threw two costly interceptions in the fourth quarter that resulted in a couple of pick-sixes for Mike Edwards, turning a 35-25 affair into a 48-25 blowout for the Bucs in a hurry.

Quite encouraging for the Falcons is the improved play of Cordarelle Patterson and Kyle Pitts in Week 2. Ryan has started to find some chemistry with his two receivers, as Patterson and Pitts combined for 131 yards and a touchdown on 10 catches against the Bucs.

Trouble is already brewing inside the Giants camp after New York crashed to its second consecutive loss on Thursday against Washington. Kenny Golladay, the star wide receiver who signed a monster four-year deal with the Giants this past offseason, got into a heated discussion with quarterback Daniel Jones during the 30-29 loss.

Golladay denied yelling at Jones, telling reporters that he was airing his frustration at offensive coordinator Jason Garrett. Golladay wasn’t the only Giant who was frustrated with his lack of touches in that Week 2 loss, with rookie wide receiver Kadarius Toney also complaining about his minuscule offensive production on social media.

The Giants will need to get their acts together to record their first win against Atlanta on Sunday. Golladay and Toney’s tantrums are the least of the Giants’ concerns in Week 3 with their offensive line in tatters after Nick Gates’ gruesome leg fracture against Washington.

According to Pro Football Focus, New York’s offensive line allowed 16 pressures on Thursday, finishing with a 76.9 pass-blocking efficiency rating, which was fourth-worst in the NFL. With Gates sidelined, the Giants hope that center Billy Price and left guard Ben Bredeson can hold the offensive line and keep Jones safe inside the pocket.

Jones has shown that he is still one of the league’s most versatile quarterbacks, recording 516 passing yards and 122 rushing yards through the first two games. He will fancy his chances against the Falcons, who have lost seven straight games dating back to last season.