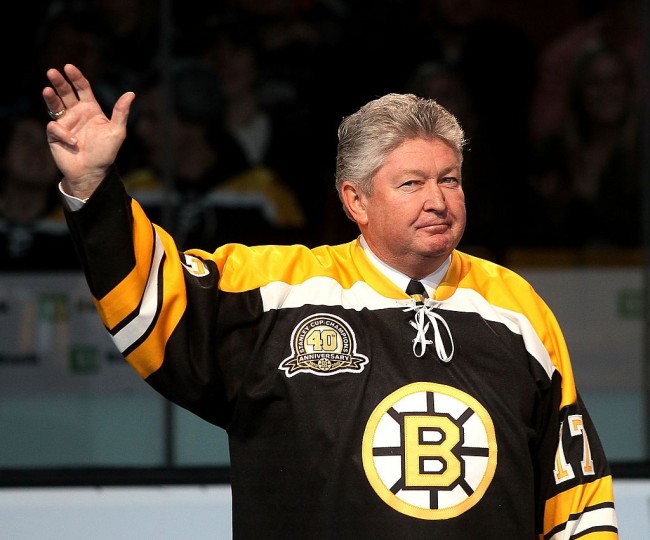 BOSTON – Fred Stanfield takes part in a celebration honoring the 1970 Boston Bruin Championship team prior to the game between the Bruins and the Pittsburgh Penguins at the TD Garden on March 18, 2010 in Boston, Massachusetts. (Photo : Bruce Bennett/Getty Images)

The hockey world is mourning the loss of two-time Stanley Cup champion Fred Stanfield, who passed away on Monday at the age of 77. Stanfield’s former team, the Boston Bruins, announced his death on Tuesday. They didn’t reveal, however, the cause of his demise.

The Bruins posted a message on Twitter, saying that the passing of Stanfield saddens them, and they are keeping his family, friends, and teammates in their thoughts.

The Bruins are saddened by the passing of two-time Stanley Cup champion Fred Stanfield.

We are keeping his family, friends, and teammates in our thoughts.

Stanfield rose to prominence during his time in Boston, helping the Bruins capture the Stanley Cup twice in 1970 and 1972. The Toronto native played six seasons with the Bruins, with his main role acting as the No. 2 center behind Phil Esposito.

Stanfield is part of one of the famous trades in the history of the National Hockey League, with the Bruins acquiring him, Esposito, and Ken Hodge from the Chicago Blackhawks in exchange for Gilles Marotte, Pit Martin, and Jack Norris in 1967.

That trade paid dividends for the Big, Bad Bruins, who enjoyed tremendous success with the trio. In the six seasons that Stanfield, Hodge, and Esposito played together in Boston, they combined to score 650 goals and recorded 925 assists for 1,575 points.

Stanfield, a model of consistency for the Bruins

In the 448 games Stanfield played with the Bruins, he managed to notch 135-274-409 points, which was good for 28th on Boston’s all-time list. Stanfield was a model of consistency during his time with Boston, scoring 20 or more goals in all six of his seasons with the B’s.

Stanfield stepped up his game in the latter stages of his Bruins career, scoring no fewer than 76 points in each of his seasons from ’70-71 to ’72-73. Stanfield played a vital role as well in the championship runs of the Bruins, scoring a combined 32 points in 29 playoff outings in the two Cup years.

Stanfield was then traded in May 1973 to Minnesota for goalie Gilles Gilbert. He continued to play hockey until 1978, when he decided to retire as a member of the Buffalo Sabres. Stanfield’s career has been incredible, racking up 211 goals and 405 assists for 616 points in 914 games played for the Chicago Blackhawks, Boston Bruins, Minnesota North Stars, and Buffalo Sabres from 1964 to 1978. Stanfield also recorded 21 goals and 35 assists in the playoffs.

Former Boston Bruins star Johnny Bucyk paid tribute to his former teammate on Tuesday, saying Stanfield was a good player, a tough player and that he knew how to handle the puck. Stanfield played alongside Bucyk and the late Johnny McKenzie in Boston’s famous second line during their championship era in the 70s.

A Process that is Advancing the Dairy Farms