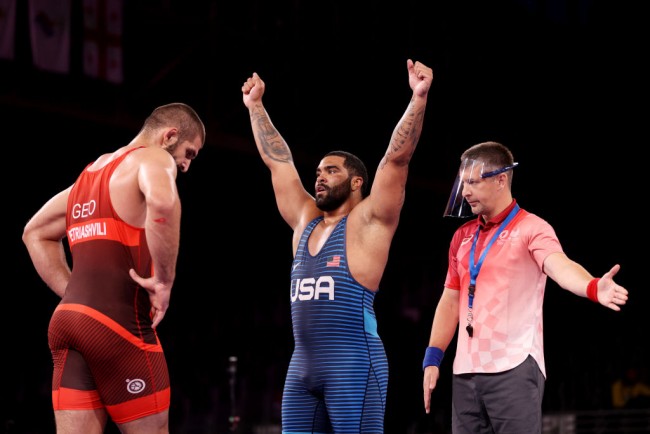 WWE pulled off a major coup on Thursday, signing Tokyo Olympics gold medalist Gable Steveson to a multi-year deal. He was one of the most coveted free agents in the combat sports market after shooting to fame this past summer with a dramatic win in Tokyo in the sport of freestyle wrestling.

Steveson’s gold medal win was the stuff of legends, coming from three points down in the last 10 seconds to beat Georgia’s Geno Petriashvili, 10-8, in the final of the men’s freestyle heavyweight class. Steveson captured the imagination of wrestling fans with his flair for the dramatic as he busted out his signature backflip after the comeback win.

After that victory, questions were already being asked about the 21-year-old wrestler’s next move, and we got the answer now. Steveson got the best of both worlds as he signed a NIL deal with WWE, allowing him to return for his senior year at the University of Minnesota and defend his national heavyweight championship at the NCAA Division I wrestling.

To help accelerate Steveson’s knowledge of in-ring work, WWE will set up near the Minnesota campus a remote training facility for its new star signing where he can learn the intricate details of the pro wrestling craft with the company’s coaches.

Steveson was delighted with his impending move to pro wrestling, saying, “I’ve been on WWE since I was really young.” Steveson said that he was on guys like Brock Lesnar and Paul Heyman for a very long time, and because he is an entertainer on the wrestling mat, he felt the move to WWE was the right choice for his career.

UFC also made a hard push for Steveson, holding talks with the champion wrestler following his win in Tokyo. Sources told ESPN‘s Marc Raimondi that UFC had plans to eventually bring Steveson onto Dana White’s Contender Series to compete for a possible contract with the MMA giants. Talks between the two parties, according to Steveson, didn’t progress that far.

Steveson is just the latest top freestyle wrestler to join the WWE. Kurt Angle became a famous WWE champion and superstar after winning the gold at the 1996 Atlanta Olympics. Brock Lesnar, like Steveson, was a national champion at the University of Minnesota, and he parlayed that success into a highly successful career in the WWE, where he became one of the company’s biggest stars.

Steveson considers Lesnar a great mentor to him, and he is already envisioning a blockbuster WrestleMania match against the former UFC heavyweight champion in the near future. That day can’t come soon enough for pro wrestling fans.