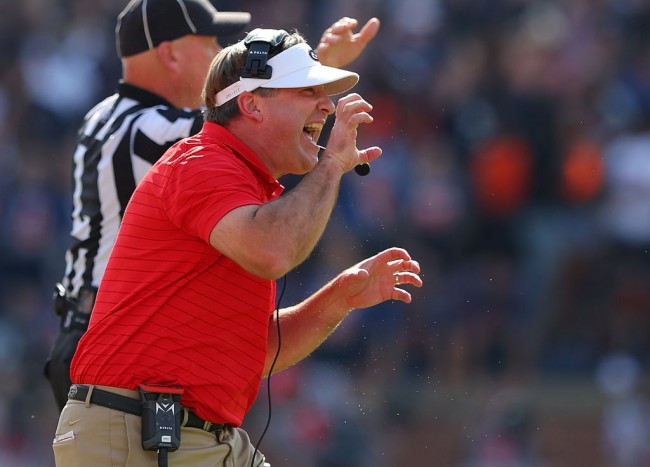 AUBURN, ALABAMA – Head coach Kirby Smart of the Georgia Bulldogs yells to his team against the Auburn Tigers during the first half at the Jordan-Hare Stadium on October 09, 2021 in Auburn, Alabama. (Photo : Kevin C. Cox/Getty Images)

This season, the Georgia Bulldogs preserved their unbeaten record with an impressive 17-point victory over the Kentucky Wildcats in Week 7. They will look to keep that perfect slate intact when they take on the struggling Florida Gators in a blockbuster SEC matchup in Jacksonville this weekend. Can Kirby Smart keep the momentum going in this Georgia vs Florida showdown? Read our preview for a breakdown of this game.

The Georgia Bulldogs headed into their bye week feeling good about themselves after they defeated the Kentucky Wildcats at home in Week 7. The Bulldogs pulled off a 30-13 victory over the Wildcats to improve their record to 7-0. The Bulldogs head into Week 9 still ranked No. 1 in the Associated Press Top 25 poll.

Over halfway through the season and every FBS team has given up at least 100 points this season… except @GeorgiaFootball 😤🐶 pic.twitter.com/7cXlDAfCdq

The Bulldogs are chasing a place in history as they look to beat the records set by the Alabama Crimson Tide in the 2011 season when they allowed just 8.2 points and 183.7 yards per game. The Bulldogs will be tested by a Florida side averaging 34.4 points per game this season, 26th in the FBS.

Related Article: AP Top 25 Poll: Alabama Jumps Past Oklahoma to No. 3; Oregon Soars to No. 7 Ahead of Week 9

The Florida Gators suffered their third defeat of the season in Week 7, losing to LSU in a 49-42 shootout. The Gators wilted before LSU running back Tyrion Davis-Price, who ran 287 yards and three touchdowns for a school record.

Tyrion Davis-Price is a MONSTER 🔥

That was an embarrassing display by the Florida defensive line as the Tigers entered that contest ranked 127th nationally in rushing. It did not help matters that Florida was careless with the football in that game against LSU.

The Gators threw four interceptions as they finished the game with a minus-4 turnover ratio. The Tigers were able to accomplish that without their top cornerbacks Derek Stingley Jr. and Eli Ricks.

The defeat was costly for Florida as the Gators dropped out of the top 25 in the AP Poll, with voters clearly not impressed by their 2-3 record in conference play. The Gators will look to get their season back on track when they host Georgia in a marquee clash.

The Gators will take comfort in the fact that they defeated the Bulldogs in their previous meeting last year. Florida pulled off a 44-28 victory over Georgia in their last game in Jacksonville.

Georgia wins and covers the spread.