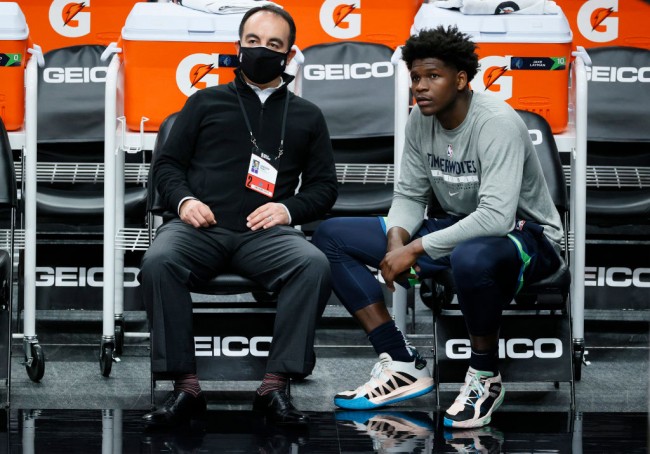 PORTLAND, OREGON – President of Basketball Operations Gersson Rosas and Anthony Edwards of the Minnesota Timberwolves watch the warm ups before the game against the Portland Trail Blazers at the Moda Center on January 07, 2021 in Portland, Oregon. (Photo : Steph Chambers/Getty Images)

The Minnesota Timberwolves stunned the basketball world just weeks before the start of the new NBA season by announcing the dismissal of Gersson Rosas on Wednesday. Details behind the Wolves’ firing of their president of basketball operations have started to emerge with reports suggesting that Rosas’ removal was because of his inappropriate relationship with a female staffer inside the organization.

Sources told ESPN‘s Ramona Shelburne that incoming owners Alex Rodriguez and Marc Lore were already planning to relieve Rosas of his duties given the poor results of the Wolves during his tenure. However, that process accelerated when photographic evidence surfaced regarding Rosas’ consensual romantic relationship with another employee.

According to Bleacher Report‘s Jake Fischer, Rosas and the woman in question were seen kissing in a suite at the Allianz Field last Saturday during a game of Minnesota United FC. The media outfit obtained the pictures of the two together, one of which was a close-up shot of Rosas and her female companion sitting beside one another in the suite’s light blue cushioned seats. Another photograph showed the two of them leaning towards each other for a romantic embrace.

Bri Bauer, VP of Communications & Engagement, is no longer listed on the #Timberwolves website

A Minneapolis reporter noted that on the same day as Rosas’ firing, Bri Bauer, the Vice President of Communications & Engagement was no longer listed on the Wolves’ website. Bauer and Rosas were both hired by the Wolves in 2019.

Rosas grabbed the headlines that year with his appointment as the Wolves’ new president of basketball operations, replacing Tom Thibodeau in that post. He broke new ground with that move as Rosas became the highest-ranking Latino in the front office of an NBA franchise.

Rosas was later criticized for his firing of coach Ryan Saunders and subsequent hiring of Chris Finch from the Toronto Raptors. The National Basketball Coaches Association launched a stinging rebuke of Rosas for rushing the hiring process and not maximizing the opportunity for other minority candidates.

Team owner Glen Taylor, who is transferring control of the Wolves franchise to Lore and Rodriguez over the next two years, decided to fire Rosas. He appointed Sachin Gupta, Minnesota’s executive vice president of basketball operations, Rosas’s temporary replacement.

Interestingly, Rosas had a falling out with Gupta several weeks ago. Such was the rift between the two individuals that Rosas barred Gupta from entering the Wolves’ facility. According to a report from Jon Krawczynski and Shams Charania of The Athletic, Rosas blocked Gupta from making a move to the Houston Rockets weeks ago because of its poor timing and the latter’s knowledge of Minnesota’s long-term plans.