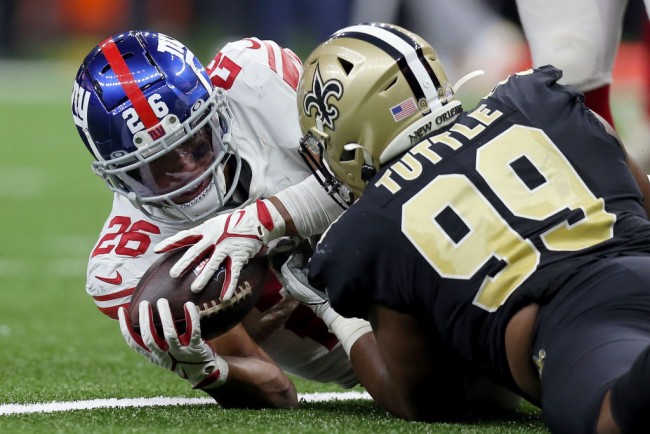 NEW ORLEANS, LOUISIANA – Saquon Barkley (#26) of the New York Giants scores the game winning touchdown in the game against the New Orleans Saints in overtime at the Caesars Superdome on October 03, 2021 in New Orleans, Louisiana. (Photo : Jonathan Bachman/Getty Images)

The Dallas Cowboys and the New York Giants will renew their long-standing rivalry this coming Sunday when they square off in a mouth-watering NFC East showdown at the AT&T Stadium. Which team will emerge with the pivotal win in this Giants vs Cowboys clash?

The New York Giants finally chalked up their first win of the season with a thrilling 27-21 overtime victory over the New Orleans Saints on Sunday. It was a crucial victory for the Giants, who suffered heart-breaking defeats to Denver, Washington, and Atlanta in their opening three games.

The Giants looked like they were on their way to another loss after falling behind by 11 points in the final quarter. New York produced a remarkable comeback, though, with Daniel Jones and Saquon Barkley leading the charge. Jones recorded a career-high 402 passing yards, 67 of which came during the game-winning drive in overtime. Barkley delivered the finishing touches to that drive, running for a 6-yard touchdown to give the Giants the unlikely win.

Things will get more challenging for the Giants in Week 5 as they will face one of the league’s hottest teams in Dallas. The Cowboys have been on fire to start the season, averaging 40.5 points per game this campaign.

Dallas extended its winning streak to three games on Sunday afternoon with an impressive 36-28 victory over the Carolina Panthers. It was a critical win for the Cowboys, who handed the Panthers their first defeat of the season.

Dak Prescott led the way for the Cowboys in this one-sided win, completing 14 of 22 passes for 188 yards with four touchdowns and no interceptions for a passer rating of 130.3. Prescott has now thrown a total of seven touchdown passes in his last two outings at the AT&T Stadium.

RT if you always believed in Dak Prescott

Prescott got some help from Ezekiel Elliott, who rushed for a season-high 143 yards on 20 carries and scored a touchdown on the ground. Amari Cooper contributed for the Cowboys as well, making three receptions for 69 yards and a score to lead all Dallas receivers.

However, the play of Trevon Diggs stole the show for the Cowboys in the Week 4 win. The second-year pro recorded two interceptions against Carolina, boosting his season total to five. Diggs, who has now racked up eight picks in his first 15 NFL starts, became the first player in Cowboys history to record an interception in each of Dallas’ first four games of the season.

There’s some injury concern, though, regarding Diggs ahead of the Week 5 clash against the Giants. He exited the game against the Panthers early in the fourth quarter due to back tightness. Head coach Mike McCarthy eased fans’ concerns, saying the Cowboys just elected to play it safe with Diggs.