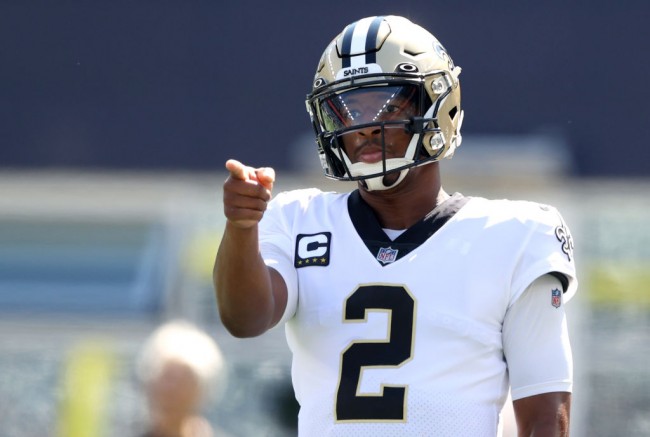 FOXBOROUGH, MASSACHUSETTS – Quarterback Jameis Winston of the New Orleans Saints warms up before the game against the New England Patriots at the Gillette Stadium on September 26, 2021 in Foxborough, Massachusetts. (Photo : Elsa/Getty Images)

The Saints are finally coming home. New Orleans will make its much-anticipated 2021 debut in front of its home supporters this coming Sunday when the Saints host the New York Giants at Caesars Superdome. Here’s an in-depth breakdown of this Giants vs. Saints clash to see who has the edge between these two NFC teams.

It’s tough being a New York football fan nowadays. The Jets starting the season 0-3 wasn’t a complete surprise, but the biggest shock so far this season for fans in the Big Apple has been the futility of the Giants. Like the Jets, the Giants have opened the 2021 campaign with three consecutive losses, the latest one, a 17-14 heartbreaker against the Atlanta Falcons.

Younghoe Koo broke Giants’ fans’ hearts with a 40-yard field goal as time expired to give Atlanta its first win of the season. It was the second consecutive game for the Giants, where they lost on the final play.

For the Giants to record their first win against the Saints, they will need to capitalize on their long drives. They scored just 14 points against the Falcons even though they gained 346 total yards. That is unacceptable, given that Atlanta allowed 40 points per contest before their Week 3 meeting.

The onus then is on Daniel Jones to maximize New York’s scoring opportunities. He completed 24 of 35 passes for 266 yards against the Falcons but didn’t record a single touchdown through the air. That will need to change against a Saints defense that’s allowing just 14 points per game this season, the third-fewest in the NFL.

Momentum is with the New Orleans Saints heading into their Week 4 showdown with the New York Giants after thrashing the favored New England Patriots at Gillette Stadium on Sunday. Jameis Winston threw two touchdown passes while Malcolm Jenkins recorded a pick-six for the Saints, who improved their overall record this season to 2-1.

It was a huge bounce-back performance by Winston, who recorded a career-low passer rating the previous week against the Carolina Panthers. He was more composed against the Pats as he completed 13 of 21 passes for 128 yards. Alvin Kamara also was back to his dominant self, rushing for 89 yards on 24 carries and making three receptions for 29 yards and a score.

The Saints will be licking their chops at the prospect of facing the Giants as they have fared extremely well against them of late. The Saints have won five of their last seven meetings with the Giants since they hired Sean Payton as their head coach in 2006. During that stretch, New Orleans is 3-0 against New York at home.

The Saints pile more misery on the Giants with a convincing 31-20 victory.

Is Intelligent Automation Overhyped in the 21st Century?