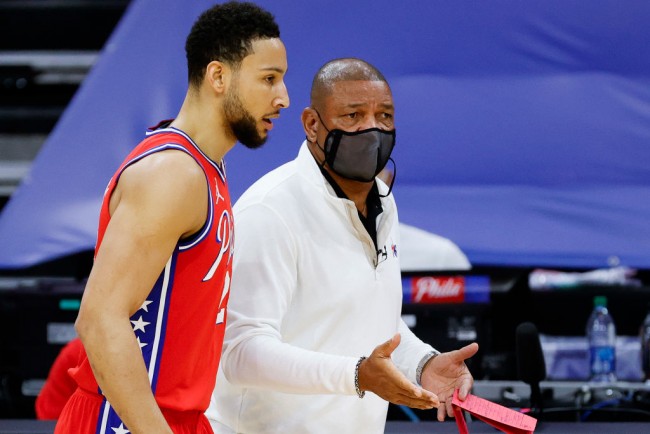 The Ben Simmons transfer saga took another twist on Wednesday, with the NBA fining Golden State Warriors owner Joe Lacob $50,000 for violating the league’s anti-tampering rule. Lacob found himself in hot water after he made comments regarding Simmons in an interview with Rusty Simmons of the San Francisco Chronicle.

In that interview, Lacob didn’t mention Simmons directly but referred to the Sixers star as the “Defensive Player of the Year candidate in Philadelphia.” Lacob said that they are always looking at everything to see if they can improve their team.

Lacob then expounded on the Simmons issue and his possible move to the Warriors, saying, “In some ways, it doesn’t really fit what we’re doing. He makes a lot of money. And, can he finish games? I don’t know.”

Lacob then questioned Simmons’ fit with the Warriors, especially with Draymond Green already in their lineup, saying, “Draymond and him are very similar in the sense that neither one really shoots, and they do a lot of the playmaking.”

Lacob was also hesitant to take in Simmons’ huge contract, saying that his salary structure is another issue. Simmons has four years and $147 million remaining on the max contract he signed with Philadelphia, including $33 million for the 2021-22 season.

Simmons grabbed the headlines on Tuesday after news broke that the All-Star forward will not report for the Sixers’ training camp opening next week. Sources also told ESPN‘s Adrian Wojnarowski that Simmons has decided not to play another game for Philadelphia, with the Sixers forward telling management that he wants a trade out.

Philadelphia head coach Doc Rivers isn’t giving up on Simmons, though, telling ESPN‘s Keyshawn, JWill, and Max on Wednesday morning that he wants to convince his star forward to stay in the City of Brotherly Love. When asked about Simmons’ trade request, Rivers said, “I hope we can change that thought. That’s part of our job.”

Rivers then explained that he believes Simmons can win an NBA title with the Sixers even with his lack of offensive production, saying, “I do think Ben can score way more than he has scored, but that’s not what makes him great. What makes him great is all the other things he does.”

Rivers pointed out that Simmons held Atlanta guard Trae Young to just 5-of-23 shooting from the floor in the series loss to the Hawks. The focus, however, went to his five-point performance in Game 7 after the Sixers suffered a shock exit at home.

With the start of the 2021-22 NBA season less than a month away, it will be interesting to see whether Rivers’ latest charm offensive will help change Simmons’ stance regarding the Sixers, the only team he has played for in the professional ranks.

The Global Cybersecurity Market is Expected to Reach US$345.4 Billion by 2026

How Data Science and Big Data are Shaping the Indian Food Industry in 2021?