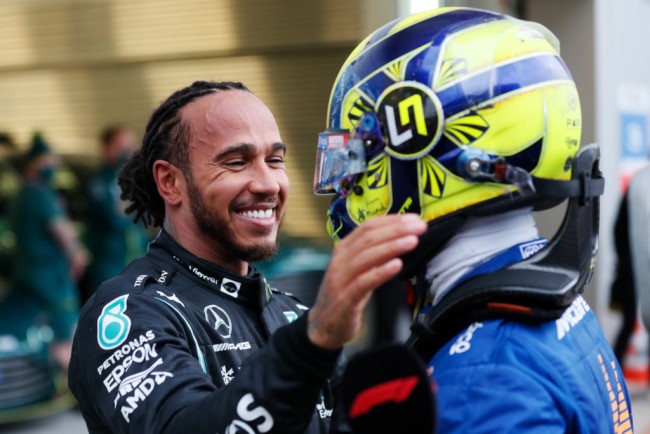 Lewis Hamilton captured his 100th Formula 1 race win in dramatic fashion on Sunday, crushing Lando Norris’ hopes of a maiden F1 victory in a frantic finish at the Russian Grand Prix. Heavy rain engulfed the Sochi track in the last few laps, resulting in Norris surrendering the lead and the win to Hamilton.

Hamilton gained some ground on Norris after Mercedes decided to take a late pit stop and change his tyres to the wets with four laps remaining in the 53-lap race. That proved to be a tactical masterstroke as the rain increased further in the closing stages, with Hamilton assuming the lead over Norris on Lap 51 with the Brit’s McLaren struggling to stay on track due to the downpour.

Heartbreak for Norris in Sochi

It was a disappointing loss for Norris, who refused his team’s orders to make a late stop for the wet tyres, opting to stick with the slicks instead. That decision proved costly, with Norris denied in his bid to become the youngest British winner in Formula One history.

Norris’ loss was Hamilton’s gain, though, with the seven-time champion regaining the lead over Max Verstappen in the Driver’s Championship. Hamilton now holds a two-point advantage over the Dutchman, with just seven races remaining in this enthralling title contest.

Verstappen will still feel over the moon with Sunday’s result, taking a P2 finish despite starting the race on the back of the grid following an engine penalty. He managed to limit the damage, though, thanks to the late downpour with Verstappen barging into the podium places after a late pit stop. Verstappen jumped from seventh to second in a hurry with Red Bull’s call to switch to the intermediate tyres coming at precisely the right time.

Ferrari’s Carlos Sainz also benefited from the late chaos, taking third place after making a late stop to change his tyres. McLaren’s Daniel Ricciardo and Mercedes’ Valtteri Bottas finished fourth and fifth, respectively, with both of them taking full advantage of their early stops for treaded tyres.

Alpine Renault’s Fernando Alonso, who climbed to second place at one stage, finished the race in Sochi in sixth. Norris, who led for the majority of the race and came close to recording his first win in Russia, finished a disappointing seventh. Rounding out the top 10 were Alfa Romeo’s Kimi Raikkonen, Red Bull’s Sergio Perez, and Williams Racing’s George Russell.

One guy who surprisingly didn’t finish in the top 10 was Charles Leclerc. The Ferrari driver looked to be headed for a points finish, climbing up to the fourth place with the rain wreaking havoc on the race. Leclerc had to stop later on, though, with the French star dropping down to 15th place as a result.

10 Signs Show Ethereum Heading Towards the Top in 2021 & Beyond