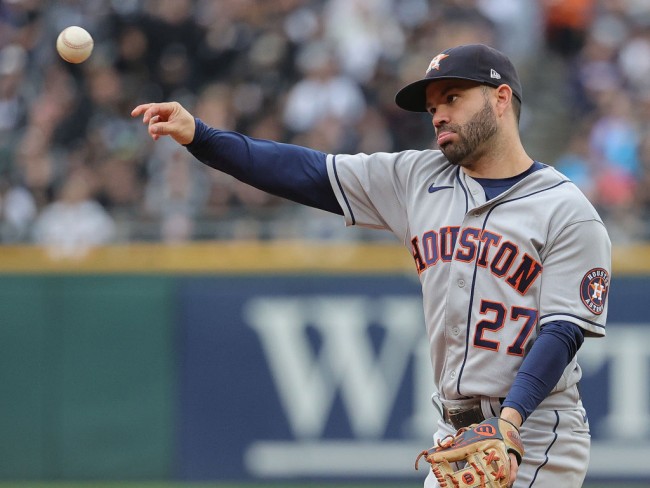 CHICAGO, ILLINOIS – Jose Altuve of the Houston Astros throws to first base against the Chicago White Sox at the Guaranteed Rate Field on October 12, 2021 in Chicago, Illinois. The Astros defeated the White Sox 10-1. (Photo : Jonathan Daniel/Getty Images)

The Houston Astros are moving on to the American League Championship Series after trouncing the Chicago White Sox, 10-1, in Game 4 of the American League Division Series at the Guaranteed Rate Field. It was a historic win for the Astros, who became just the third team in the majors to reach five consecutive league championship series.

A familiar foe will be standing in their way in the ALCS as the Astros will next face the Boston Red Sox. They had squared off twice in the postseason, with Houston and Boston splitting those two playoff meetings. The Astros defeated the Red Sox, 3-1, in the 2017 ALDS before Boston exacted revenge in the 2018 ALCS, beating Houston 4-1 in the best-of-seven affair.

Two of Boston’s starting pitchers in the ALCS were punished by the Astros hitters earlier this season. In a loss to Houston, Nathan Eovaldi had one of his worst games of the year, allowing a season-high 11 hits to go with three walks and five runs in 5 2/3 innings of action. Eduardo Rodriguez also struggled in his lone start against the Astros this season, surrendering six hits and six runs.

The Astros may be flying high now, but they have major injury concerns ahead of their showdown with the Red Sox. Lance McCullers Jr., the ace of the Astros’ pitching staff, made an early exit in Game 4 of the ALDS against the White Sox due to forearm tightness.

Houston Astros pitching coach Brent Strom said he is praying for the best case scenario with McCullers, but he remains optimistic that his star pitcher will be fine. McCullers was superb in the series opener against the White Sox, throwing 6 2/3 scoreless innings.

With McCullers possibly sidelined, the onus is on veteran Zack Greinke and young hurlers Framber Valdez, Luis Garcia, and José Urquidy to carry the pitching cudgels for the Astros. Houston’s starting rotation put up a solid 3.63 ERA in the regular season, and that pitching depth will be a major weapon for the Astros.

During the regular season, Valdez and Garcia stamped their class against the Red Sox, dishing out quality starts against Boston. Garcia stymied the Red Sox offense on June 1, allowing just one run on five hits with six strikeouts over seven innings. Valdez dominated the Red Sox as well the following night, recording 10 strikeouts in seven innings of action.

Valdez punished the Red Sox again a week later, allowing just one run on five hits in 7 1/3 innings of action. For the Astros to return to the World Series again, they will need Valdez and Garcia to replicate those outstanding performances and be the stalwarts of Houston’s pitching staff in this series.

Here is How AI Helps in Predicting Gene Expression