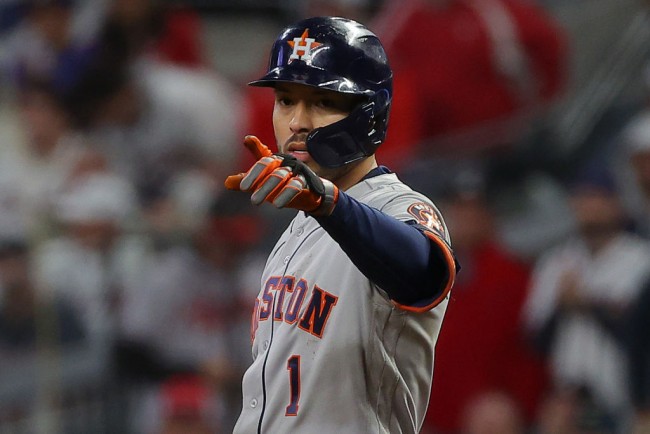 ATLANTA, GEORGIA – Carlos Correa of the Houston Astros reacts after hitting a single against the Atlanta Braves during the fifth inning in Game Five of the World Series at Truist Park on October 31, 2021 in Atlanta, Georgia. (Photo : Kevin C. Cox/Getty Images)

The Houston Astros stayed alive in the 2021 World Series after pulling off a thrilling come-from-behind victory in Game 5 on Sunday night. In the first inning, the Astros erased an early four-run deficit to record the all-important 9-5 win. Action now shifts to Houston for Game 6, with the Braves holding a 3-2 lead in the World Series.

Astros rally past Braves in Game 5

The Braves took a calculated risk in Game 5, selecting Tucker Davidson to be their starting pitcher for their final home game of the season. He was added to the roster after ace Charlie Morton broke his leg during the series opener on Tuesday. It was a bold decision by Braves manager Brian Snitker as this was just Davidson’s second game in 4.5 months.

The Braves drew first blood in Game 5, with Adam Duvall hitting a grand slam in the bottom of the first inning to give Atlanta a 4-0 lead. The Astros never lost faith, though, after that early explosion as they scored many runs against Davidson.

They halved the deficit in the second inning with Alex Bregman and Martin Maldonado each driving in a run. The Astros then tied the game in the third inning, with Carlos Correa and Yuli Gurriel each recording an RBI. Davidson faced just 11 batters, allowing four runs and getting just six outs in his surprise start.

Freddie Freeman gave Atlanta the lead again in the bottom of the third inning, hitting a solo homer to send Braves fans into a frenzy. There is no quit, though, with the Astros as they grabbed the lead for good in the top of the fifth inning.

Maldonado drew an RBI walk to tie the game at 5-5 before Marwin Gonzalez delivered the hit of the game, recording a two-out, two-RBI single that gave the Astros a 7-5 advantage. Maldonado and Correa provided the insurance runs for the Astros with RBI singles in the seventh and eighth innings.

Correa breaks out of slump after lineup switch

Astros manager Dusty Baker’s decision to move Correa to third in the batting lineup worked wonders as the shortstop finally broke out of his slump with three hits. He only had two hits in 14 at-bats in this World Series before Game 5. The Astros’ bats finally woke up after a sluggish performance in Game 4, with Houston going 0 for 8 with runners in scoring position in that 3-2 loss.

The advantage is still with the Braves, though, who will get another crack in Game 6 to win their first World Series title since 1995. Starting for Atlanta in that pivotal game is Max Fried. He struggled in Game 2 against the Astros, allowing six runs on seven hits and one walk in five innings of action.