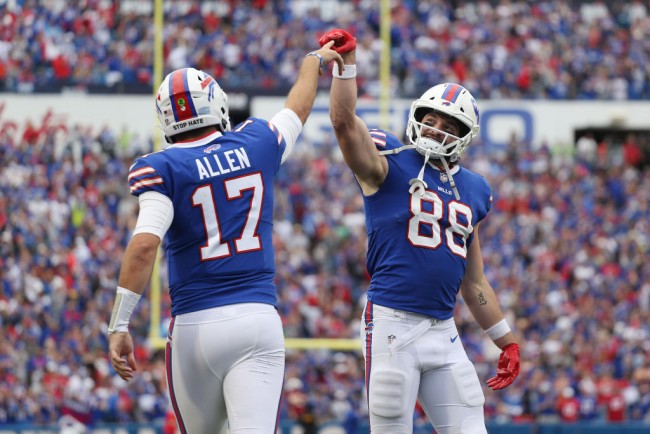 ORCHARD PARK, NEW YORK – Quarterback Josh Allen (#17) and Dawson Knox (#88) of the Buffalo Bills celebrate after a rushing touchdown by Allen during the fourth quarter of the game against the Washington Football Team at the Highmark Stadium on September 26, 2021 in Orchard Park, New York. (Photo : Joshua Bessex/Getty Images)

Josh Allen had himself quite a game on Sunday for the Buffalo Bills, throwing four touchdowns and rushing for another in a 22-point win over the Washington Football Team. The Bills will look to sustain the momentum of that huge victory when they face the Houston Texans in Week 4. Read on below for an in-depth breakdown of this Texans vs Bills clash.

Things are going from bad to worse for the Houston Texans, who crashed to their second consecutive loss with a 24-9 defeat to the Carolina Panthers on Thursday night. The Texans had no answer for Sam Darnold, who threw for 304 yards and rushed for two touchdowns.

It won’t get any easier for them this coming weekend, as standing in their way are the AFC East-leading Buffalo Bills. Buffalo has scored an average of 39 points in its last two wins.

The onus then is on rookie quarterback Davis Mills to deliver a solid performance for the Texans in Week 4. He completed 19 of 28 passes for 168 yards with one touchdown in the loss to the Panthers. Houston’s offensive line failed to protect their signal-caller, with Mills getting sacked four times.

Not bad for a rookie… Davis Mills has his first career touchdown pass and he could be about to lead the Texans to a huge upset! 👀 #CARvsHOU pic.twitter.com/Vxy5VP7j9p

The good news for Houston is that Mills has already formed a connection with Brandin Cooks. He caught nine passes for 112 yards in the Week 3 loss. Cooks became just the second Texans player in franchise history to record at least 300 receiving yards through the first three games.

For the Texans to record the mighty upset in Week 4, they will need to find ways to establish their running game against the Bills. Five Houston players combined for just 42 yards on 17 carries in the loss to Carolina, with the Texans’ longest rushing play netting only seven yards. They found the going difficult against a Panthers side that possess the league’s No. 1 run defense.

The Buffalo Bills will head to their showdown with the Houston Texans with momentum on their side after trouncing the Washington Football Team, 43-21, on Sunday. It was another impressive victory for the reigning AFC East champions, who grabbed their second consecutive win to improve their record to 2-1.

The One Who Knox. @dawson_knox #BillsMafia

In their latest win, Josh Allen starred for the Bills, accounting for five total touchdowns in the rout. He completed 32 of 48 passes for 358 yards and four touchdowns. Allen also rushed for nine yards and a score on four carries. With that performance, Allen surpassed the 100-touchdown mark in just his 47th career start for Buffalo.

Sunday’s game marked Allen’s fifth career outing with four passing touchdowns and 300 yards passing, one more than the Bills record held by legendary Hall of Famer Jim Kelly. In the final quarter, Allen’s two-yard touchdown run was his 26th on the ground and a new franchise record. Allen will look to extend that record against a Houston side that allowed two rushing touchdowns to Darnold in Week 3.