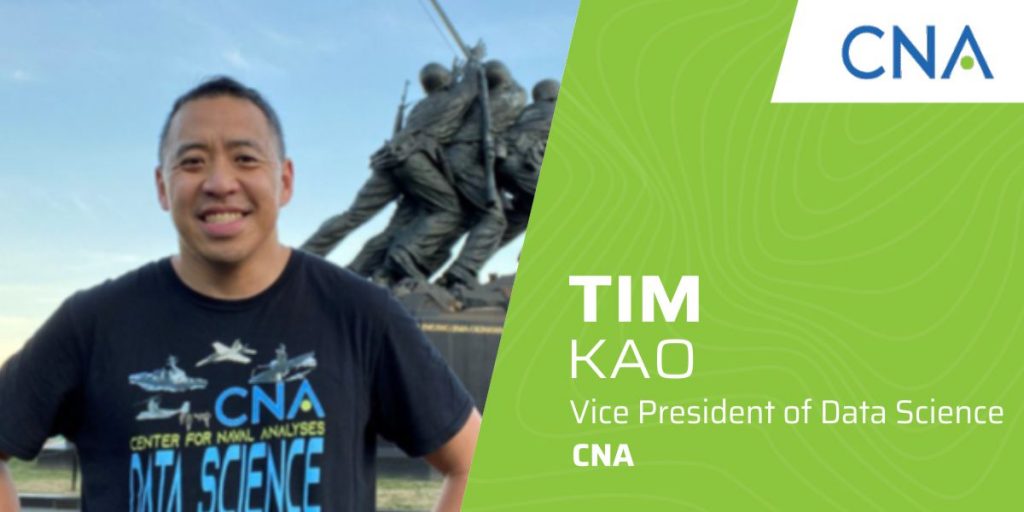 The Center for Naval Analyses (CNA), a Federally Funded Research and Development Center (FFRDC), is sponsored by the Department of the Navy and headquartered in Arlington, Virginia. CNA’s mission is to help Navy and Marine Corps leaders ensure America’s defense in the 21st century. CNA is unique because of its real-world, empirical, and data-driven approach to operations analyses and use of data scientists as expert observers of military operations. CNA is the nation’s oldest operations research organization with lineage tracing back to World War II (1942) when CNA scientists went to sea aboard Navy ships to observe and analyze anti-submarine warfare operations in order to help defeat German U-boats. Its research staff has diverse educational disciplines with nearly 70% with Ph.D. degrees and 92% having graduate-level degrees.

A Visionary Leader with a Strong Background

Tim Kao is the Vice President of Data Science, CAN. He has served in the United States Marine Corps for 20 years, including being a part of two combat tours to Iraq and Afghanistan. During those two decades, Tim served in the artillery, special operations, space, jungle warfare, and operations analysis commands. He received a B.S from the Air Force Academy, an MBA from the University of Colorado, and a Master’s in Operations Research from the Naval Postgraduate School. Tim started working at CNA in 2015 and is currently the Vice President of Data Science. As the VP, he has the privilege of leading over 25 data scientists that are collaborative partners with Navy and Marine Corps sponsors and committed to supporting America’s naval services.

From a Learner to Teacher: An Incredible Journey

Data scientists rightfully focus on relationships between features and variables. However, leadership, even for data scientists, is fundamentally is about relationships with people. As a young jumpmaster instructing parachuting at the Air Force Academy, Tim quickly learned that the safety and success of personnel learning to jump out of airplanes depended on the trust and relationship they had with him as their instructor. If that was lacking, the probability of having students that refused to jump increased significantly. In the Marines, Tim worked for some great leaders and some extremely bad ones. The difference between those two types of leaders came down to the relationships those leaders were able to establish with those people they led. Leading data scientists is no different. Tim values a data scientist’s technical skills, but their ability to exhibit the extremely hard to master ‘soft skills is just as important. That is how CNA try to hire (and are hiring!) and it contributes to the team’s success.’

Keeping Up with the Trend to Defeat Odds

Tim presumes that the ever-evolving discipline of data science requires a constant refresh on emerging algorithms, technologies, and processes. He says that when he joined CNA, he was coming from a USMC assignment as the commander of the only jungle warfare training center in the Department of Defense as well as a recent deployment to Afghanistan. While Tim was able to use some of his data science knowledge to support those military units, many of my data science skills quickly atrophied, as he did not use them regularly. According to him, overcoming this challenge required a growth mindset to catch up quickly on emerging machine-learning techniques and code. This continues to be a challenge today as new things in data science are released every day. “A growth mindset is critical for a data scientist for continued success,” highlights Tim.

Curiosity and Caring Behavior: Two Secrets of a Successful Leader

Tim opines that data science leaders have to be curious and caring. He adds that being curious is important because leaders won’t know everything but need to know enough to search out an answer through research and collaboration with others. Being caring is also vital because Tim remarks that he really believes in the truism that no one cares how much you know until they know how much you care. “Leading data scientists really isn’t much different than leading people in combat. You have to know yourself (what are your data science capabilities), know your enemy (what is the problem being solved), and take care of your troops (data scientists) so they want to do a good job for each other and you,” asserts Tim.

Tim explains that CNA uses concepts like developing minimum viable products (MVPs) to iterate with its Navy and Marine Corps sponsors. They are an integral part of the process in the creation of a data science solution CNA is developing. CNA not only works with them on the user interface, but collaborates with them to understand the data, how it is collected, what is missing, and assumptions the company needs to make. A successful data science effort requires both superb data scientists and a tight partnership with the end-users the analytics.

Tim exclaims that leaders have to ensure their data scientists have opportunities to leverage disruptive technologies in their work. Like other professions and even more so, data scientists want to do innovative and meaningful work. It’s incumbent on data science leaders to provide that opportunity. He adds that even if data science team members think they are too busy doing work to learn new things, by definition, there is a major inherent risk from overlooking disruptive technologies. That risk will manifest itself by the team not being very busy much longer as their work will go to people that have learned those new things.

A rising tide lifts all boats, and such is the case for many data science organizations says, Tim. The leaders that separate themselves in this environment are the ones that can couple the hard skills (i.e. statistics, programming, machine learning) with the soft skills (i.e. communication, empathy, collaboration). According to Tim, at CNA, the team works on both sets of skills every day so it can help provide a competitive advantage for America’s defense.

“Don’t forget about your people” asserts Tim. He continues that CNA spends more of its waking hours working than spending those hours with families. Tim insists emerging data scientists do everything they can to help their people look forward to coming to work every day. Tim asks them to be the kind of leader that provides the psychological safety for people to share their ideas and problems with you. According to Tim, data scientists get better solutions and outcomes if they build an inclusive and learnable environment in their workplace, where their team will work as long and as hard as it takes to accomplish the mission. He concludes by saying, “Mission first, people always.”