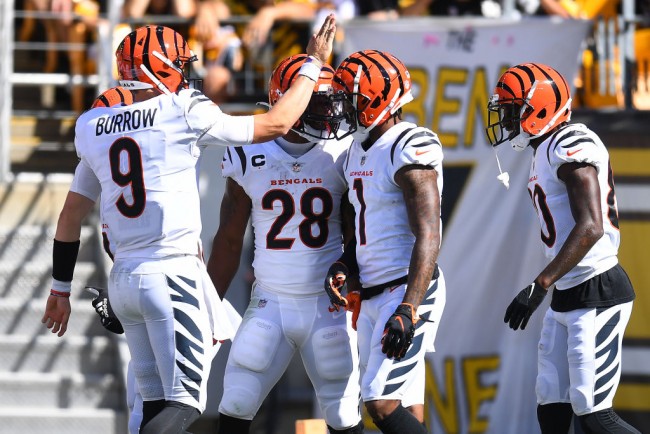 PITTSBURGH, PENNSYLVANIA – Ja’Marr Chase (#1) of the Cincinnati Bengals celebrates a touchdown with this team during the second quarter in the game against the Pittsburgh Steelers at the Heinz Field on September 26, 2021 in Pittsburgh, Pennsylvania. (Photo : Joe Sargent/Getty Images)

Quarterbacks Joe Burrow and Trevor Lawrence square off in a battle of No. 1 picks on Thursday night in the Jaguars vs Bengals clash. Can Burrow keep his hot start for Cincinnati, or will Lawrence grab his first-ever NFL win for Jacksonville?

The losses keep on coming for the woeful Jaguars. Jacksonville stumbled to its 18th consecutive defeat on Sunday, dropping a heart-breaking 31-19 loss to the Arizona Cardinals. It was a disappointing loss for the Jags, who led 19-10 in the third quarter before allowing the Cards to score 21 unanswered points.

Trevor Lawrence has had a horrendous start to his NFL career, with the rookie quarterback throwing seven interceptions and losing two fumbles in Jacksonville’s first three games. The No. 1 overall pick in this year’s draft threw two picks in the loss to Arizona, including one on a botched flea-flicker that resulted in a pick-six by cornerback Byron Murphy Jr.

It’s important for the Jags that Lawrence eliminate those errors in Week 4 against the Bengals. That’s easier said than done, though, with Cincinnati already recording three interceptions this season. The Bengals are sixth in the NFL in scoring defense, allowing just 18 points per game this campaign.

The Cincinnati Bengals returned to winning ways Sunday with a commanding 24-10 victory over the Pittsburgh Steelers at Heinz Field. It was a huge bounce-back win for the Bengals, who suffered a gut-wrenching 20-17 loss against the Chicago Bears in Week 2. With their victory against the Steelers, the Bengals improved their season record to 2-1.

The Bengals now set their sights on a possible 3-1 start when they take on the Jacksonville Jaguars this coming Thursday. For Cincinnati to achieve this feat, it needs to continue its excellent play on the defensive end. The Bengals’ defense was relentless on Sunday as it forced Ben Roethlisberger to throw two costly interceptions.

Joe Burrow also starred in the win against Pittsburgh with last year’s No. 1 pick throwing for 172 yards and three touchdowns. He has formed an instant connection with former LSU teammate Ja’Marr Chase, with their long-standing chemistry netting the Bengals two touchdowns against the Steelers.

Joe Burrow to Ja’Marr Chase is fun. They’ve connected for a TD in all 3 games this season. pic.twitter.com/lk1qvVaBbe

It also helped matters that Cincinnati’s offensive line did its job in Week 3, with the Bengals ending the Steelers’ 75-game streak of them having a sack. With Burrow safe in the pocket, he was able to complete 14 of his 18 passes. Burrow and Chase will look to punish Jacksonville’s secondary that is allowing 302.3 yards per game through the air this season, fifth-worst in the NFL.