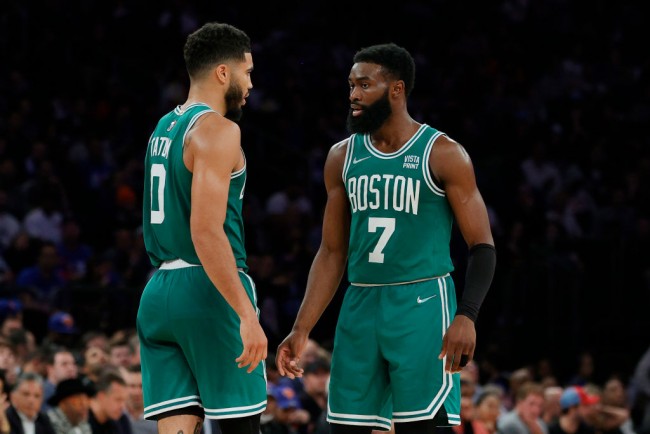 NEW YORK, NEW YORK – Jaylen Brown #7 talks with Jayson Tatum #0 of the Boston Celtics during the second half against the New York Knicks at Madison Square Garden on October 20, 2021 in New York City. The Knicks won 138-134. (Photo : Sarah Stier/Getty Images)

The Boston Celtics extended their winning streak to two games with a thrilling 101-98 overtime victory over the Indiana Pacers on Monday, January 10. Jayson Tatum and Jaylen Brown starred for the Celtics, who improved their record to 20-21 for the season. They have now won four of their last six games.

Brown had a monster double-double, scoring 26 points and grabbing 15 rebounds. Brown, who also had six assists in 44 minutes of action, shot 11 of 26 from the field, including going 3 of 6 from deep. Tatum also had a double-double, posting 24 points and 12 rebounds. He was aggressive right from the get-go, knocking down 10 of his 11 free throw attempts. Robert Williams III dominated down low, recording 14 points and 12 rebounds.

The Celtics head into the middle of the season, sitting in 10th place in the Eastern Conference. Tatum made the biggest play of the game with 1.8 seconds remaining in regulation, knocking down a tough fadeaway jumper on the left baseline to tie the game at 89-all and force overtime.

The overtime period was a back-and-forth affair, with both teams having countless opportunities to take control of the contest. The Celtics stormed to a 98-93 lead with more than a minute left, but the Pacers battled back and had a chance to send the game into a second overtime. Lance Stephenson missed a game-tying 3-pointer with 12.2 seconds, with the Celtics grabbing the rebound.

Indiana was forced to foul Brown, who went on to split his charities. The Pacers were given a lifeline when Justin Holiday was fouled from the perimeter. He knocked down all three of his free throws to cut the lead to 99-98 with three seconds left. Indiana quickly fouled Tatum, who restored the Celtics’ advantage to three points with 2.5 seconds left.

Williams III sealed the win for Boston with a steal of Torrey Craig’s long desperation pass from the Pacers’ own baseline. The Celtics improved to 13-8 at home with the win while the Pacers’ woes continued on the road, dropping to 3-16 in their away games.

The Pacers are amid a terrible losing rut, absorbing defeats in seven of their last eight games. They are currently in 13th place in the Eastern Conference standings with an abysmal 15-26 slate.

It did not help Indiana that Domantas Sabonis had a poor showing on the offensive end against the Celtics. He scored just 11 points against Boston after producing a career-high 42 points. Sabonis, who entered the fourth quarter with just four points, did manage to pull 23 rebounds for another impressive double-double.

The Pacers had trouble with their outside shooting, missing 18 of their first 22 3-point attempts. They managed to score just 60 points through the first three quarters but almost pulled off the upset win in the end.

Novak Djokovic is a Free Man: Judge Rules in Favor of Serb as Australian Open Bid is Back On : OTHER : Sports World News