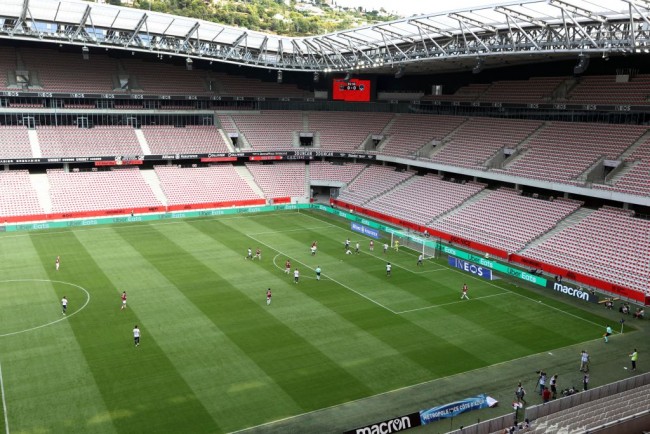 Jean-Pierre Adams, who made more than 140 appearances for Nice before, has died at the age of 73 on Monday. (Photo : VALERY HACHE/AFP via Getty Images)

The soccer world is in mourning after former France international Jean-Pierre Adams died on Monday at the age of 73. He had been in a coma for 39 years following a botched operation on his knee. Adams’ former clubs, Paris Saint-Germain and Nimes, revealed the unfortunate news, putting to an end one of the saddest stories in world football.

Former PSG and France footballer, Jean-Pierre Adams, has died at the age of 73 after 39 years in a coma.

He never regained consciousness after an error with receiving his anaesthetic during a knee surgery in March 1982.

Jean-Pierre Adams, who was born in Dakar, Senegal, was an outstanding defender back in the 1970s. He suited up for Nimes from 1970 to 1973 before moving to Nice, where he made more than 140 appearances. He later made the switch to Paris Saint-Germain, seeing action there from 1977 to 1979. His club-level excellence earned him a spot on the French national team, with Adams winning 22 international caps for Les Bleus in the 1970s.

Nimes paid tribute to one of its finest players, posting a message on Twitter. “This morning, we learned about the death of Jean-Pierre Adams. He played for Nimes on 84 occasions and alongside Marius Tresor, he formed the “Black guard.” Nimes concluded its statement by offering the club’s sincere condolences to Adams’ loved ones and family.

Paris Saint-Germain also released a statement, saying, “PSG has lost one of its glorious former players. PSG offers its condolences to his family and loved ones.”

Jean-Pierre Adams was still at the peak of his powers when he underwent a routine knee operation on March 17, 1982, at the Lyon Hospital. Adams, who was just 34 at that time, even said that he felt in great shape ahead of the surgery.

Related Article: When Will Cristiano Ronaldo Start Suiting Up for Manchester United?

Adams suffered from brain damage after the botched operation

On the day of his surgery to repair a damaged tendon in his knee, an injury Adams suffered while on a coaching training camp, many hospital staff was on strike. However, doctors in that Lyon hospital decided to still go ahead with the operation, with the anesthetist in charge of Adams looking after eight patients at the same time.

Adams’ operation was also supervised by a trainee at that time, who later admitted in a report, “I was not up to the task I was entrusted with.” The anesthetist and trainee committed numerous errors during Adams’ operation, including administering a near-fatal dose of anesthesia, causing the French international to suffer a cardiac arrest and permanent brain damage.

The anesthetist and trainee who were in charge of Adams’ surgery, were finally punished in the mid-1990s, with both of them given a one-month suspended sentence and a 750 euro fine. That seemed to be little consolation for Adams’ wife Bernadette, who remained by her husband’s side all these years despite the unfortunate tragedy.

How Does Modern Business Use Big Data?