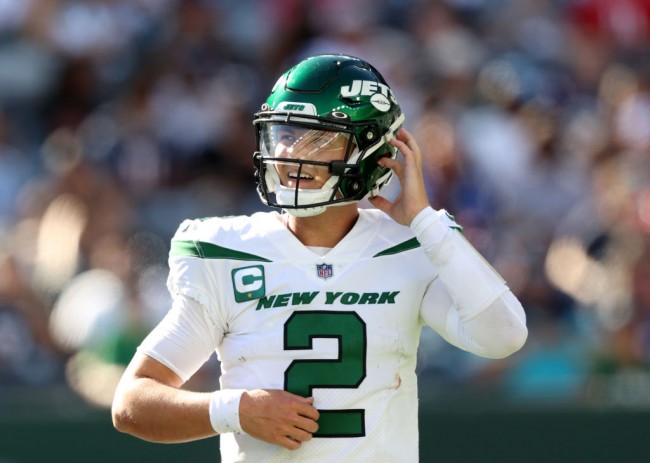 This season, the Denver Broncos preserved their unbeaten slate with an impressive 10-point win over the Jacksonville Jaguars on Sunday. The Broncos will look to sustain their hot start this coming Sunday when they square off with the reeling New York Jets. Read on below for an in-depth preview of this Jets vs Broncos clash.

Things are going from bad to worse for the New York Jets as they stumbled to their second consecutive defeat on Sunday with a 25-6 loss to the New England Patriots. The Jets have now lost each of their last 11 meetings with the Patriots and 11 straight games in September as they dropped to 0-2 for the third consecutive season.

Things are bound to get tougher for the Jets as they will next face the unbeaten Denver Broncos in Week 3. For the Jets to record a major upset, they will need to get a much-improved performance from quarterback Zach Wilson.

Zach Wilson’s third interception of the first half.

The highly touted rookie disappointed in his home debut, throwing four interceptions against the Pats. Wilson completed just 19 of 33 passes for 210 yards and no touchdowns as he finished the game with a quarterback rating of 37.0.

The news coming out of New York is that Zach Wilson was dealing with a groin injury that he suffered in the Week 1 loss to the Carolina Panthers. Wilson was a full participant on Wednesday’s practice, though, with head coach Robert Saleh telling reporters that his groin injury is only a minor one.

The Denver Broncos are flying high at the moment, soaring to the top of the AFC West division after picking up impressive road wins over the New York Giants and the Jacksonville Jaguars. Leading the way for the Broncos in their 2-0 start is Teddy Bridgewater. Through the first two games, no quarterback in the NFL has attempted more throws over 20 yards than the Broncos gunslinger.

Bridgewater has racked up 592 yards, four touchdowns, no interceptions, and a 77.1 completion rate in Denver’s victories over the Giants and the Jags. He has developed quite a connection with Courtland Sutton, who caught nine passes for 159 yards against the Jaguars, including a monster 55-yard reception on the second play of the second half.

Bridgewater made history in the win against Jacksonville as he became just the fourth player in the NFL to record two touchdown passes, no interceptions, and at least a 75% completion rate in consecutive games to start a season.

It wasn’t just Bridgewater who starred in the Week 2 win as Denver’s defense also impressed in the 23-13 victory. They kept Trevor Lawrence in check the entire contest, with the top overall pick in this year’s draft completing just 14 of 33 passes for 118 yards, with a touchdown and two interceptions.

The Broncos will look to keep their defensive intensity going against a Jets offense that is averaging just 10 points per game this season, second-worst in the NFL.

Denver wins, but the Jets cover the spread.