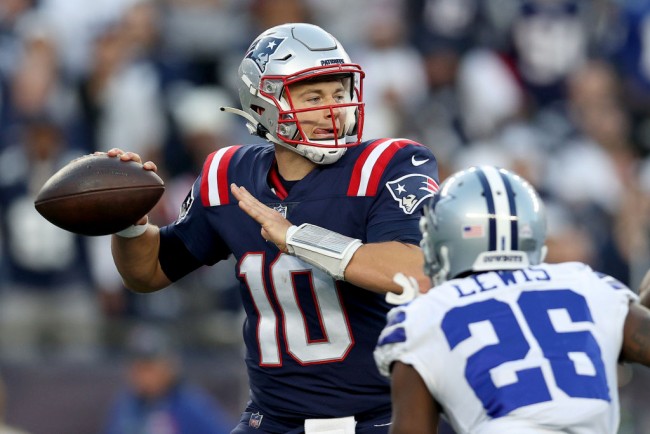 FOXBOROUGH, MASSACHUSETTS – Mac Jones (#10) of the New England Patriots throws a pass against the Dallas Cowboys in the second quarter at Gillette Stadium on October 17, 2021 in Foxborough, Massachusetts. (Photo : Maddie Meyer/Getty Images)

New England has not enjoyed home field advantage thus far this season, with the Patriots losing all of their four games at Gillette Stadium this year. They will look to end that losing skid in Week 7 when they host the New York Jets. Read our preview to see who has the edge in this Jets vs Patriots showdown.

What in the world is happening to the Jets? New York crashed to its second consecutive defeat with a humbling 27-20 loss to the Atlanta Falcons in Week 5 across the pond in London. They found no answer for Kyle Pitts, who finally had his breakout game, catching nine passes for 119 yards and a score.

The Jets had now lost four of their first five games in the Robert Saleh era to fall three games behind the division-leading Buffalo Bills in the AFC East standings. It won’t get any easier for them this coming Sunday, as standing in their way are the New England Patriots. The Jets had lost their last 11 games against the Patriots dating back to 2016.

The onus then is on quarterback Zach Wilson to step up his game in Week 7. He struggled mightily in the loss to the Falcons, completing just 19 of 32 passes for 192 yards with no touchdowns and one interception.

Wilson had a horrific showing the last time he faced the Patriots, throwing four interceptions and recording a quarterback rating of just 37.0 as the Jets were held to a measly six points. Wilson’s Total QBR through five games is only 23.9, which ranks him a lowly 31st out of 32 qualified passers in the NFL this season. He leads the NFL in thrown interceptions this season with nine.

New England’s home woes continued on Sunday as the Patriots suffered a heart-breaking 35-29 overtime loss to the Dallas Cowboys. The Patriots looked like they were on their way to a famous win over the Cowboys, but they squandered a 29-26 advantage late on, with Dallas scoring nine unanswered points at the end of regulation and overtime.

The Patriots now trail the Buffalo Bills by 2.5 games in the AFC East standings with the loss. The good news for the Pats is that they will next face the hapless New York Jets at Gillette Stadium. The Patriots crushed the Jets, 25-6, in Week 2 for one of their two wins this season.

Bill Belichick has fared extremely well against rookie quarterbacks since taking over as head coach of New England in 2000, carrying an impressive 23-6 record against first-year signal callers. This season, he is 2-0 against rookie QBs, with New England’s two victories coming against the Zach Wilson-led New York Jets and the Davis Mills-led Houston Texans.

One guy who needs to step up for New England is Mac Jones. He completed 15 of 21 passes for 229 yards with two touchdowns and one interception in the loss to the Cowboys.

Top Data Science Jobs to Apply This Week in India